Considering the City: Fighting to Save the Villa Chapel

Year after year, Erie neglects and then bulldozes its historic buildings. Will the Chapel be amongst them? 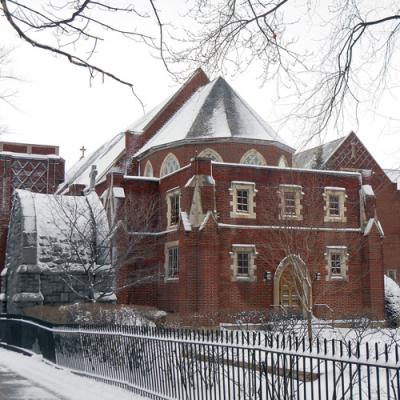 Have you ever seen a dog chained outside in the winter? Erie has ordinances against such cruelty; those concerned can call Animal Enforcement at 868.6924.

Unfortunately, Erie has no laws protecting buildings. Though experts praise the Villa Chapel's ornate woodwork and stained glass, the modestly-sized chapel, built in 1925, is unheated, leaking, and is being slowly "demolished by neglect."

The chapel is a key component of a former ecclesiastical compound that fills a city block between Eighth and Ninth streets and Liberty and Plum streets. The historic Sisters of Saint Joseph convent, school, garden, shrine, and chapel are listed on the National Register of Historic places, but this honor is not legal protection for any building in Erie. Property owners can pick up a demolition permit in the morning and bulldoze in the afternoon. Erie could use a City Planner, Demolition Review Board, Historic District ordinances, and a suburban no-growth boundary.

Realizing the chapel's vulnerability, Preservation Pennsylvania placed it on its Endangered Properties List. But this failed to spur the owners to fix the roof. In 2005, volunteers, including members of Civitas, formed the Save the Villa Chapel (SVC) committee. Hoping to partner with the Erie County Historical Society, the SVC approached then-director, Dr. David Frew, who explained the Society could not focus on preservation. Undaunted, additional volunteers helped establish the 501c3 – the Erie Center for Design and Preservation – in 2007. Renamed Preservation Erie, the group is compiling an inventory of historic properties that was last updated in the 1970s. Preservation Erie adopted the SVC and serves as its fiscal agent.

The SVC wants to work with the owners of the chapel: Pennrose Properties (80 percent), Sisters of Saint Joseph (10 percent), and the Housing and Neighborhood Development Service – HANDS (10 percent). The SVC raised $25,000, created a website, funded roof repairs, and paid for a re-use study with four architects and two-dozen stakeholders. The best proposal features a child-care center on the ground floor to generate income and a multi-use space in the former chapel space.

Before continuing to fundraise, the SVC requested a legal agreement. While Pennrose offered to sell the chapel for a dollar in 2006, HANDS & the SSJ didn't agree. Finally, in Spring 2013, the SSJ agreed, with conditions, to transfer ownership of the chapel to Preservation Erie. But at the 11th hour, HANDS reportedly asked the SSJ to delay signing the agreement to give HANDS time to investigate repurposing the chapel themselves.

Fast-forward ten months. On Feb. 15, a realty transfer notice indicated that a new corporation had purchased the chapel. It is not clear what this means for the future, but the chapel clearly isn't doing any better in the present – it was a tough winter and the roof is leaking again.

Year after year Erie neglects, and then bulldozes, its historic buildings. Most of them, built prior to 1950, were made of good materials, feature fine workmanship, and offer a respect for the urban grid. Architectural details include ornamented entrances and windows, uniform setbacks, and trees-defined streets. Today's construction is rarely as well-designed or built.

What is driving these demolitions? One reason is land values. There is a big supply of land with lower tax rates outside of the city. To support development, water-mains and utility lines are extended. Owners of open land sell their property to developers. The developers build homes, churches, stores, and industrial parks.

But, our regional population is not growing to fill these new spaces. Instead, folks already living in Erie (in older homes) move to the new homes. The vacancy of older homes encourages neglect, fosters demolition, and further reduces urban land values, in turn creating more pressure to raise taxes on the remaining city taxpayers.

Would you intervene if you saw a dog chained outside in the cold? Do you wince when you notice that another building has been torn down?

Eighty years ago, the people of Erie came together to create the Villa Chapel. The 19th century artist William Morris famously said: "Old buildings do not belong to us only;" he believed they "have belonged to our forefathers, and they will belong to our descendants." A city leader commented that Erie is: "the kind of place that tears down the Villa Chapel for a parking lot." What kind of place is Erie? As conservationist John C. Sawhill explained: "A society is defined not only by what it creates but, by what it refuses to destroy."

Civitas members can be reached at their website www.CivitasErie, via Facebook at CivitasErie.com, by emailing lisa@civitaserie.com, or by attending their tenth anniversary celebration on April 12 from 3 p.m. to 5 p.m. at the LEAF building in Frontier Park, near West Sixth Street. Preservation minded readers may hear more about the chapel from SVC members 1 p.m., Easter Sunday, April 20 at the corner of Ninth and Liberty; and, attend the Preservation Erie Greater Erie Awards fundraiser on May 1 at the Masonic Ballroom.