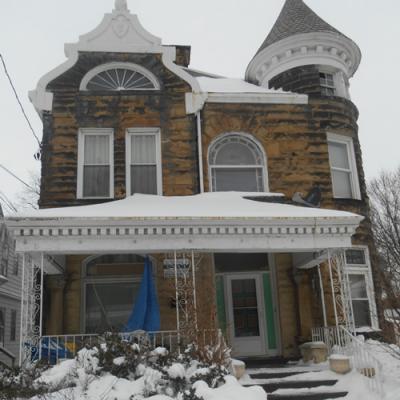 Ray Gindroz, co-founder of Pittsburgh's Urban Design Associates, claims that urban safety is a fundamental problem facing cities today. "No one wants to live, work, start a business, or shop in a city," Gindroz says, "unless it's safe."

One way Erie can become safer is by building, repairing, and using front porches.

Eyes on the Street

Jane Jacobs, the self-taught urban-planning critic, gained fame with her 1961 book, The Death and Life of American Cities, in which she coined the phrase "eyes on the street" to describe how – from windows and porches – people enjoy watching other people on the sidewalks and streets in the public realm.  Jacobs noted that the passive observations of residents resulted in an increased measure of security for everyone.

When placed in a semi-protected spot, seating attracts people. While sitting on our own porches, we have been asked for directions, about a lost dog, to purchase fundraising tickets, and to attend football games.  Porches, functioning as transitional private-public spaces, encourage casual interactions.

These elevated, covered spaces that project from apartment houses, duplexes, and single-family homes have complex ancestry. Dhiru A. Thadani, writing in The Language of Towns and Cities, explains that "the lineage of the American porch can be traced . . . from the Ancient Greek stoa to the Renaissance loggia to Thomas Jefferson's portico at Monticello" and from "West African vernacular to the Caribbean gallerie to the piazzas of the American South." This international ancestry is appropriate to our "immigrant nation."

Almost always added to the front of American homes from 1800-1940, porches served as a place where residents cooled off during summer months. The comings and goings of neighbors and strangers entertained those seated on their porches. By the mid-20th century, television (and air conditioning) moved people inside. Erie architect Adam J. Trott reports that the "popularity of the back(yard) deck" further reduced "life on the street."

But Erie Zoning Hearing Board's Jacqueline Spry notes that 35 years ago, the New Urbanism movement began bringing life back to the street in new developments, such as Seaside, Fla. New Urbanists built homes closer to the street and always included a front porch to provide "a place where people met and talked to each other."

While sitting on the porch residents can choose whether to talk to someone walking by or ignore them. They may read, play a guitar or just sit quietly. Regardless, research shows that their porch presence contributes to a sense of safety to everyone walking down the street, riding a bike, or pushing a stroller.

The New Urbanist co-authors of The New Civic Art: Elements of Town Planning Andres Duany, Elizabeth Plater-Zyberk, and Robert Alminana jointly noted that porches positively impact street-life by providing "the passerby with a glimpse of the private life of the residents." David Sucher, in his book, City Comforts, says that "people like to walk together." He describes a universal custom – a  "social stroll" – that involves, "watching other people, and being watched, and chatting."

In our inner-city neighborhoods couples, parents and children, and many folks with dogs on leashes take an after-dinner stroll around the block – even in winter. Over time, the dozens of short interactions (a wave, a greeting, a handshake) build trust – and community.

Porches, separate from the main buildings, usually have their own roofs that are held up by some kind of vertical element: unfinished 4 x 4 posts, or carved and painted wooden columns, or – an Erie specialty – tapered brick supports.

Some Erie porches are architecturally significant. Trott described a home on the 500 block of West Eighth Street as a "classic masonry building" with a "unique cast iron porch façade … (that) desperately needs cleaning, repair, prep and painting."

Sadly, too many facades in Erie include the ghost roofline of former porches or bricked-in second-floor doorways (once leading to a second-floor porch). Owners – often those of rental properties – choose to tear off porches instead of repairing them.

Spry says that her studies in urban planning taught her how a front porch can "ignite" the social energy of the house and "connect it to the life on the street." Spry says that well-used porches transform the residents themselves into the "safeguards of the neighborhood."

Wonderful projects, like the Summer 2014 "Porch Fest" (featuring live music on West Seventh Street porches and stoops), should be repeated. In addition, neighborhood watch groups could volunteer to shore up sagging porches. A member of City Council could legislate a program to incentivize porch repairs on rental properties.

All these efforts will help create a safer city.

Partnering for a Safer City

Gindroz, who taught urban design at Yale for twenty years, noted that good urban and architectural design (including porches) is "known to be an essential component of urban safety." But, Gindroz warns, "design alone… is powerless."

While Erie has many involved community leaders, residents, and police, designers are missing from this partnership. In the face of gun violence, working with designers and saving porches may seem like a foolish distraction. But protecting porches (and engaging the expertise of an urban designer) needs to be a part of Erie's urban safety strategy.

Civitas members can be reached at their website www.civitaserie.com, via Facebook at CivitasErie, by emailing Lisa@civitaserie.com, or by scheduling a Friday morning meeting at the Civitas office in the Masonic Building, 32 W. Eighth St