Civitas presents an "interview" with The Congress for New Urbanism in mind. 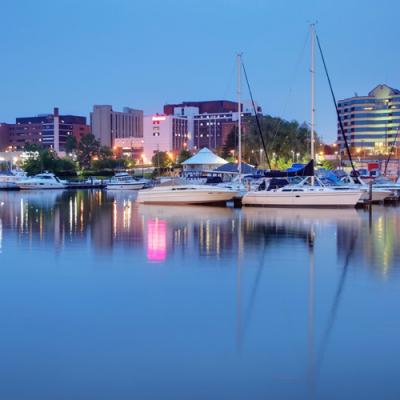 A century ago, planner John Nolen claimed that a single agency with "collective power" should work "in the name of the community" to coordinate planning. In 2015, The Congress for the New Urbansim (CNU) , is "the leading organization promoting walkable, mixed-use neighborhood development, sustainable communities, and healthier living conditions."

Erie didn't follow Nolen's advice. Few leaders in Erie are aware of CNU's guidelines. Instead, departments and Authorities make plans without considering the whole city. When voters are unhappy about the plans, they turn to City Council for help.

This year, seven people are running for three City Council seats in the May 19 Primary: Sonya Arrington, Gary Grack, Bob Merski, Rebecca Styn, Richard Wagner, Jon Whaley, and Mel Witherspoon. Here are some of their ideas about addressing Erie's streets, transportation, waterfront, buildings, open spaces, safety and economy through the lens of John Nolen. To wit, Grack didn't comment on Erie's buildings, and Whaley confined his remarks to public safety, economic development, and streets because he views them as "the most important" of the seven topics.

The New Urbanists work to slow urban traffic (to protect pedestrians and support businesses) with two-way streets and on-street parking. To promote circulation, they avoid dead-ends and maintain underpasses, bridges and viaducts.

Jon Whaley says the "streets of Erie are a mess" and wants to revise the management. Mel Witherspoon said that the streets should "be repaired as soon as the weather allows." Richard Wagner views Erie's current practice of issuing bonds to cover street repairs as "financial suicide" and proposes a $3 million "dedicated budget line."

Styn noted that improved public transportation "would help to preserve our community, enhance mobility, and attract growth." Wagner, citing Erie's proximity to Buffalo, Cleveland, and Pittsburgh, believes that both the EMTA and "high-speed rail" are vital parts of a long-term plan.

Merski proposes "new meters that take electronic payments" and hopes to explore "late night bussing." Arrington says that "affordable public transit is critical" because of "our high poverty rate." The Erie Metropolitan Transit Authority (EMTA) closed Division Street and moved bus lines off of State Street. During his service on EMTA's board, Grack "learned how our citizens … rely on public transportation." Witherspoon commented, "The city has supported … EMTA as they [complete] their new building and redirect the bus line."

Former Milwaukee Mayor John O. Norquist, who led CNU for a decade, said Erie's waterfront has the best natural formation on the Great Lakes; he advised extending the city's grid to the waterfront.

Grack says, "The waterfront is one of our greatest resources." Witherspoon wants this asset to be "developed in a manner that it is friendly to its citizens." Arrington proposes that an aquarium be constructed and believes that "parking lots" are "taking up … valuable space," suggesting instead that Erie needs "green-space, public access, and mixed-use" development utilizing "community benefits" and "labor diversity" agreements.

Merski says that the "waterfront has to have a balance: public and private, higher-end restaurants/bars, and affordable places" and that "CRIZ [City Revitalization and Improvement Zone] designation is critical" for development. Wagner believes that rather than a "convention center, parking ramps, and a Sheraton hotel" that other types of privately-funded development should have occurred. Styn proposes "more collaborative efforts between public and private entities" to "bridge the divide between developable space and profitable development" and suggests finding ways to increase pedestrian access to the waterfront from the downtown.

CNU promotes adaptive reuse instead of demolition as a green and local-jobs-producing strategy.

Styn encourages, "when possible", the preservation of "old buildings that are a part of our history and character." Wagner believes that we "owe it to future generations to maintain some of the history. Merski supports preservation because of the "economic benefits" and proposes consideration of a new zoning code to prevent " suburban type structures and garage doors on fronts of buildings downtown."

Witherspoon "would like to see the buildings on State Street between 10th and 11th get a facelift through federal grants." Arrington, also concerned about property maintenance, proposes an "improvement fund" to benefit owner-occupied homes that need to be brought "up to code" and suggested a "re-purposing task force" to match "vacant usable properties with people and businesses."

Witherspoon encourages places for "small games for kids and passive games for senior citizens." Grack believes Erie has "great examples of open spaces" that already" enhance our sense of community, and Styn applauds Erie's existing "50-plus parks" and notes that "open spaces are a vital element in city sustainability."

Wagner explained that our "parks and boulevards" provide a wonderful "sense of freedom and openness" necessary in urban settings. Merski notes that there are many "underutilized city parks on the Eastside lakefront." To maintain this wealth of open space, Arrington proposes to seek "more productive relationships with state and federal agencies and officials – to secure more funding."

Whaley reports that Erie spends more than $2 million a year in public safety overtime costs and says that additional police can be hired and placed on the streets via changes in "scheduling, re-assignments" and technology. Whaley proposes the use of surveillance drones for both crime and fire-fighting efforts, and believes that "in-vehicle computer terminals plus GPS can be used to report crime and monitor employee activity, thus freeing up time for more policing."

Wagner says that to address safety over the long term, "we really have to look at lack of jobs, blight and … poverty." Styn takes a similar view noting that  "Safer neighborhoods" will result from "an ample supply of quality, family sustaining jobs."

Arrington will seek "funding for prevention programs" along with "youth employment opportunities;" she is advocating  "foot/bike patrols" to reduce crime. Grack says "public safety is of utmost importance." Merski says we must get gun violence under control while stating that, "Erie is safer than most metropolitan areas," noting that offenders "are given plea deals" and in a few months are "back on the street often repeating the same offenses." Witherspoon says he is "aware of issues going on" and supports law enforcement.

CNU notes that vital, well-designed cities attract economic development. Norquist, during his recent visit to Erie as the keynote speaker at Preservation Erie's Greater Erie Awards, discouraged using tax-abatement incentives to lure developers, favoring instead an approach that emphasized the innate "wealth of the city."

Wagner believes that a "logistics hub" is important to the city's revitalization. Wagner notes that the city's and county's 23 economic development organizations cause confusion because entrepreneurs and business owners seeking to move into Erie "have to spend an enormous amount of time trying to find which group" can be of assistance.

Whaley proposes a "Buy Erie, Grow Erie" campaign, and believes it is important to combine regional economic development organizations including the "Chamber, Ben Franklin, DevelopErie." Wagner and Whaley believe that this "dysfunctional" situation with overlapping groups should be replaced with a single organization.

Whaley also believes the City should be meeting with "every single company" and business owner to find out what kind of assistance they need. Witherspoon says, "economic development is major because it creates jobs." Arrington, Merski, Styn, Whaley, and Wagner all believe that a stronger economy will reduce crime here. To that end, Arrington encourages welcoming refugees, establishing a municipal fiber Internet, and funding summer jobs for youth.

Grack says he will "maximize funding opportunities" to "support business development and entrepreneurial activity." Styn proposes "re-instating a 100 percent LERTA [Local Economic Revitalization Tax Assistance]" to "incentivize business development" as well as restructuring "the tax system to encourage businesses to relocate in the city" and to foster "technology-focused, small business incubators and accelerators."

Merski notes that Erie won't "grow from the outside in, but from the inside out" and, because "entrepreneurs are going to drive growth" we must "utilize our resources" to support them by creating regional workspace like the Tech Shop in Pittsburgh.

Civitas encourages you to take more time to research the men and women running more fully and to vote on Tuesday, May 19. Learn more about the candidates at their websites and Facebook pages. Civitas members can be reached at their website www.civitaserie.com, via Facebook at CivitasErie, by emailing Lisa@civitaserie.com, or by scheduling a Friday morning meeting at the Civitas office in the Masonic Building, 32 W. Eighth St.