Considering the City: The Made in Erie Marketplace

Creating the Made in Erie Marketplace 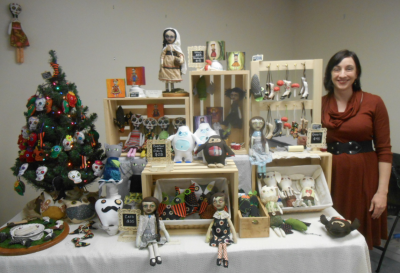 Civitas rented the Masonic Temple's Camelot Room, hired a designer to create a logo, printed cards, located vendors, booked a chef, signed musicians, found a security guard, and alerted the media. The first Made in Erie Marketplace succeeded in putting locally-made products into the hands of Erie shoppers, transferring over $4,000 into the pockets of entrepreneurs, and successfully establishing itself as a replicable event.

The next year, Civitas hoped to hand the project over to an organizer with the passion to make it her own. Stephanie Westley, a crafter, art historian, and Edinboro alumnus, agreed to organize the event. With the continued sponsorship of Civitas and two new supporters – Edinboro University Foundation and the Start-Up Incubator – the 2014 Marketplace was underway. Westley described it as "an opportunity for local businesses – most without a bricks-and-mortar location – to sell their work." The 2014 event draw even larger crowds and, reportedly, over $6,000 in sales.

After Westley relocated to Texas late last summer, Civitas searched for a new organizer. Paige Bosnyak, a Project Manager at Bayfront East Side Taskforce (BEST) agreed to take charge. Jeremy Bloeser, the Director of BEST, allowed Bosnyak to manage the Marketplace as a part of her duties, thus providing in-kind financial support for the project. When Bloeser was asked why he helped to create the 2015 Marketplace, he commented that it "brings people into the neighborhood" and helps to "break down stigmas" about "the City and the east side."

In her Erie Times-News essay about the Marketplace, Bosnyak cited a study which determined that for every $100 spent at a chain store, only $43 stayed in the local economy; while locally-owned business allowed the economy to capture $68 of each $100.

Bosnyak scheduled the Marketplace on Small Business Saturday, and extended the event from three to eight hours. She moved the Marketplace to a smaller, donated venue on Parade Street and arranged free use of the Polish Falcons parking lot. The new ground-floor location and two sets of doors allowed 500 shoppers to move through the crowded, but well-lighted rooms.

Pauline Snyder, who was selling her work for "the first time ever," started her "new venture" by purchasing molds, mixing cement, and casting and painting "concrete garden décor." Mary Orsini's knit scarves evolved from a hobby she took up while immobilized with a broken leg last winter. Fiber artist Mary Snyder commented that in Erie, "art is an integral part of local culture."

Erie County Poet Laureate, Cee Williams, founders of Poets' Hall and Poets' Hall Press, did such a brisk sale of chapbooks that he needed to restock early in the event.

Jennifer Terry, of Rags and Old Iron, sold candles surrounded in vintage prints of moons and anatomical studies of hearts, along with a series of Victorian-inspired Krampus ornaments. Jessica Stadtmueller presented sewn objects including her Blackwood Cottage series of "curious creatures and intriguing dolls."

Near the front door, two members of the new Erie Vegan and Vegetarian Society shared recipes and collected donations. In the back room, Fran D'Santi, creator of the Pennello "snarl-free" brush was busy with two assistants demonstrating techniques and selling box after box of her locally manufactured product. She commented that "sales [were] going very well."

Brad Shuffstall, a recent graduate from Edinboro University, said he had a "great time" selling his functional wooden objects. Shoppers scooped up a $300 table, and much less pricey bowls, cutting boards, and lidded boxes fabricated from scraps of local and imported woods.

We at Civitas are proud to add the Made in Erie Marketplace to the list of successful projects and organizations we have initiated to help Erie become a thriving, safe, and happy City.

Erie's self-taught urban critic, Stephen Sonnenberg, co-founded Civitas with Laurel Swartz and Lisa Austin in 2004. Swartz organizes and focuses the expansive Civitas plans. Sonnenberg, who, worked for the City for 30 years and studied Erie's built environment at night (from the back of a trash truck) and inside almost every building in the City as a water meter reader.  Through Austin's work as a social-sculptor, she (along with Sonnenberg, Swartz and dozens of other concerned residents, co-founded All Aboard Erie, Innovation Erie and Preservation Erie. With Sonnenberg Austin has initiated dozens of projects and events including the Made in Erie Marketplace and the Industrial Design Workshops at Blasco Library's Idea Lab. Austin teaches three-dimensional design and Sculpture at Edinboro University. Civitas members can be reached at their website www.civitaserie.com, via Facebook at CivitasErie, by leaving a message at (814) 452.8401, by emailing Lisa@civitaserie.com, and by scheduling a Friday morning meeting at the Civitas office in the Masonic Building, 32 W. Eighth St., Erie, PA.