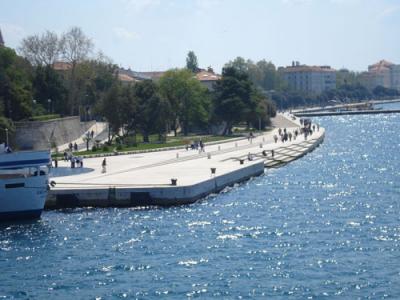 The Sea Organ in Zadar Croatia, which creates music when water interacts with tubes located beneath the surface.

John O. Norquist (the Mayor of Milwaukee during that city's dramatic revitalization) says that if communities "want their waterfronts to come alive [they should build] small cafes, bars, and retail outlets to reflect the people and the culture." Marilyn Jordan Taylor, dean of the University of Pennsylvania School of Design reports that "high-quality public spaces spur private development." The renowned former Mayor of Bogota, Colombia, Enrique Penalosa, claims that "good pedestrian space" is the key to vital cities.

Instead of focusing on waterfront hotels, waterfront parking lots, and private housing on the waterfront, Erie should be creating "high quality public spaces" to "spur private development" of "small cafes, bars, and retail outlets" that reflect Erie's rich past – and present.  The twin barriers of the bluff and highway must be overcome and embraced – to showcase the city's unique geography and history – and to connect the city to the water.

Three waterfront projects currently underway could be modified to create a pedestrian-friendly environment and spur more economic development in Erie.

At the foot of Liberty Street, Tom Kennedy is building a Cobblestone Hotel on the south side of the Bayfront Highway. Instead of a freestanding suburban structure, the Cobblestone could be built directly against the bluff. A rooftop hotel deck connecting with a Liberty Street pedestrian highway overpass would make the Cobblestone a regional landmark while helping to revitalize West Bayfront neighborhoods.

Guests at the Cobblestone could walk four blocks south along the historic, tree-lined boulevard to enjoy a rack of "St. Louis Style Ribs" at Three B's Saloon on the corner of Liberty and West Fourth streets or pick up some cold-cuts at Sammy's Food Deli on the 700 block to enjoy lunch in stately Gridley Park. Fans of architecture could take a walking tour of Millionaire's Row along West Sixth Street, admire the Villa Complex filling a city block at West Eighth, or stroll by the historic synagogue on West Tenth Street. Shoppers could check out the artwork for sale at U Frame It or browse at the secondhand store on West Eighth Street.

Scott Enterprises is planning a welcome mixed-use development project along Front Street to complement the Erie Maritime Museum and Blasco Library. Another parking deck will be constructed to serve this construction as well as UPMC Hamot. But, instead of viewing a parking deck from the Bayfront Highway, a band of commercial development (or architecturally-scaled public art) could be designed to hide the parked cars.

In July, the Zoning Hearing Board voted to allow the Scott project's hotel a height variance with a condition stating that "for each additional square footage of real estate created by the height variance, an additional square foot of open space is to be dedicated to the public, excluding parking lots," providing tangible "community benefit" there.  Scott's plans call for more public space, but the residential development proposed along the public access path adjacent to both of his waterfront parcels will not help revitalize the city. Along the public path and water's edge, Scott should be encouraged to build,  "small cafes, bars, and retail outlets" that will attract residents and visitors year-round (residences can be constructed above commercial spaces.).

A new hotel adjacent to the Sheraton Hotel will be constructed on the small site west of the Convention Center as a lower-priced alternative to the existing hotel.  Access to the hotel's lobby and waterfront restaurant seating will be available from the public walkway as well as the main south-facing hotel entrance, but no public access was planned beyond the required walkway.

After ongoing discussions about public amenities at the waterfront, on Aug. 20, City Councilman Dave Brennan proposed a requirement for "an 800-square-foot landscaped plaza" to permit residents, as well as hotel guests, a chance to enjoy Erie's amazing sunsets. Like the zoning board's July approval of a height variance for Scott Enterprises (with the condition of increased public space) Brennan's condition will provide a "community benefit" to balance the corporate benefit of increased height on the waterfront.

Still, a GAF site master plan is needed and should delineate multiple paths to entice both residents and hotel guests to stroll over to the Sloppy Duck, Liberty Park and other, future destinations.

Unfortunately, the Convention Center managers are planning to build a city-block-long parking deck on GAF site.  The parking deck should be installed on the large Convention Center parking lot, something Brennan proposed in a 2012 Times-News letter to the editor, suggesting it would create "more area on the GAF site for additional development or public space."

The justification for the garage's construction on the GAF site (claims of securing the GAF's toxic waste) doesn't make sense. Once "entombed," the GAF's toxic materials do not present a hazard.  Any non-residential commercial or public space could be pursued. The real reasons for putting the parking deck on the GAF site may be a desire to preserve highway views of the Convention Center, or a preference for keeping parking as close as possible to the new hotel.

To make the most of its waterfront, Erie needs a plan to create vital public spaces, and more connecting paths to attract commercial development – rather than adding to the more than 2,000 existing waterfront parking spots (many of which are empty most of the time.)

Kennedy should be encouraged to connect Liberty Street to the waterfront as a part of his Cobblestone Hotel development.  The Convention Center Authority should move the proposed parking deck to the existing parking lot east of Sassafras. The city needs to find a way to influence Scott Enterprises to abandon its perfectly legal plan to build private residences on the ground floor of waterfront buildings and instead help these investors to establish the small, diverse commercial establishments that our Gem City needs.

One hundred and one years ago, a famed planner (John Nolen) said that Erie "faces a promising future" if the residents plan "wisely and unselfishly." The question remains: Will we?

Civitas members can be reached at their website www.civitaserie.com, via Facebook at CivitasErie, by emailing Lisa@lisaaustinpa.com or by scheduling a Friday morning meeting at the Civitas office in the Masonic Building, 32 W. Eighth Street.