An excursion, an exploration, a bold experiment -- this is electroFLUX. 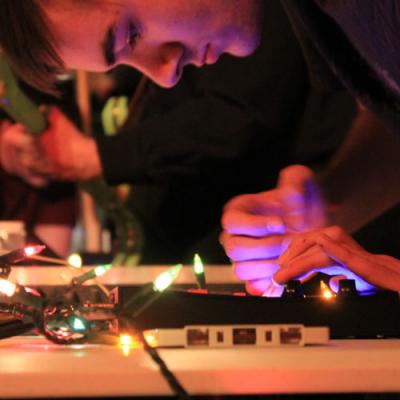 At first, having just stepped in to Basement Transmissions, I couldn't quite tell whether the music was issuing forth from the front of the venue, or the back, down from a high space, or up from below.

The sound, to my ears, was everywhere, entirely all around, and the rest of my body – the bottom of my feet through the top of my head – felt its sonic reverberations.

This was not simply (and, most certainly, not simple) music. This – the output, I soon saw, of one man (he went by Hossa Nova) and a guitar – was an excursion, an exploration, a bold experiment.

This is what came out of Basement Transmissions on Thursday, April 24: This was electroFLUX.

That short description doesn't come close to fully relaying the near-total sonic immersion brought to BT by the artists participating in that evening's installment of the ongoing electroFLUX experimental music series.

"It's [an] experimental music night here ... [and] every artist is doing something different," said BT owner, artist, and event promoter Bob Jensen. Their "intent isn't so much to form a structure" musically, he said, but to explore and experiment with "the soundscape, non-traditional music structures, and instrumentation that's out of the ordinary.

"It's more about mood, and environment, and the sound experience," Jensen said.

Untying themselves from the constraints of traditional musical structures, the artists were left free – truly free – to explore what mood, and environment, and sound can become. And the results of their experiments could range, even within any given moment, from jarring, violent discord to blissful, ethereal calm.

It's a fully natural exploration – and much like nature itself.

These days, Carbonara experiments with electric instrumental pieces influenced by flamenco and classical Hindustani styles as, he told the Reader's own Alex Bieler recently, "a cathartic vehicle for self-expression and to tell stories about myself."

Carbonara is "an amazing guitarist. Do yourself a favor and see him perform," Pittsburgh-based experimental multi-instrumentalist Mike Brother-Ong Tamburo posted in response to the Reader's preview on the latest electroFLUX event.

Simple, yet true. And he was just one of many talented musicians displaying their artistic prowess that night, each taking his turn, churning out distinct, striking sounds, and for that – for this segment of the series, for the whole series, the mini-festival of experimental notes and tones flowing from the front, the back, down below and up high – I was thankful.

I'll always pay gratitude to artists who are able to affect my space, both physical and of the spirit, and those I saw and heard that evening were certainly well capable of doing that.

To me, that's art at its most truthful, and, often, most worthwhile: Something new. Something adventurous and unhindered. Something brave.

And if you missed it yourself that night, try to keep an ear to the ground for when the next electroFLUX event may be happening at one of Erie's most progressive performance spaces.

You'll be doing yourself a favor.