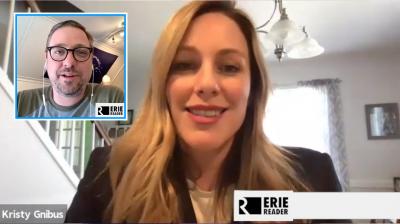 When Kristy Gnibus committed to run for Congress, she hoped to end up in the U.S. House. She never thought she'd spend so much time in her own house. Instead of shaking hands and meeting voters throughout Pennsylvania's 16th congressional district, she's campaigning like every other candidate this year – over the phone and online.

These measures have shrunk the campaign map for an otherwise geographically oversized district. The 16th congressional district includes all of Erie, Crawford, Mercer, and Lawrence counties and a majority of Butler County in the southernmost part of the district. Now, instead of spending hours each day commuting from her home and work in Erie County to events in other parts of the district, Gnibus pulls up a chair and kicks her campaign into high gear.

Gnibus will be the only candidate on the Democratic ballot when Pennsylvania votes on June 2, but she'll be taking on a five-term Republican incumbent in the general election on November 3.

When we spoke – via Zoom – she shared her story and talked about what it's like to be a first-time candidate in a time of crisis and her experience on the digital campaign trail.

For more information on Kristy Gnibus's campaign, head to KristyForCongress.com.

This year, Pennsylvania's primary election has been postponed until June 2, 2020. But between now and then, Pennsylvanians have the option to vote by mail for the first time. The process is easy and it's an option we hope you'll consider. First, apply for a mail-in ballot at VotesPA.com. Once you've submitted the application, you'll receive a paper ballot in the mail. Fill it out and drop it back in the mail. You can vote early and safely. The Erie County Board of Elections has even agreed to pay for the postage.