Corbett to Universities: Go Frack Yourself

Gov. Corbett has a plan for how Pennsylvania's universities can survive the budget crunch. Cory Vaillancourt tries to make those lemons into something, well, drinkable.

by Cory Vaillancourt
View ProfileFacebookTwitterGoogle+RSS Feed
May 4, 2011 at 12:00 AM 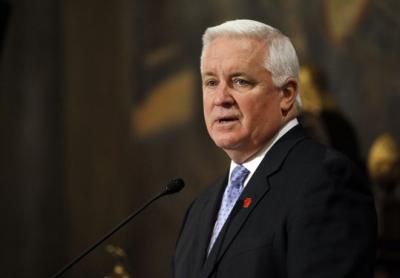 A few weeks ago, our cover story dealt with the controversial drilling process known as fracking. If you missed the article or you've been living in an underground cave, you may not be familiar with the process, which involves pumping radioactive copper, arsenic, barium, strontium, and vanadium solutions into layers of rock deep below the Earth's surface, creating man-made fractures that allow access to otherwise inaccessible pockets of natural gas or oil. So if you really do live in an underground cave, you might want to seek alternative lodgings, as a cancerous cocktail of cruelty is heading your fracking way.

Fracking already occurs all over Pennsylvania, as the documentary "Gasland" has already, ummmm, documented. This movie almost single-handedly raised awareness of the significant controversy surrounding fracking; opponents of the process cite groundwater contamination, decreased air quality, and fracking chemicals returning to the surface as potentially dangerous unintended consequences of the process. Proponents simply shout Palinesque slogans at the top of their lungs, like "drill baby drill!" and "I can see Russia from my house!"

Currently, this fracking issue is being debated on both national and local levels, but with America's voracious appetite for energy growing larger each day, it's easy to see what will probably happen here, so we might as well get used to living in a polluted carcinogenic wasteland, albeit one where our country's newfound energy independence will allow us to stop buying foreign energy from middle-eastern despots who turn around and use our money to help terrorists kill us. At least our children will be safe. Cancerous mutants, but safe.

Here in Pennsylvania, Gov. Tom Corbett recently took office faced with the daunting task of refining the Commonwealth's financial situation. Faced with a budget shortfall of more than $4 billion, cuts need to be made—government waste must be reduced, and worthless, ineffective programs eliminated. I don't know about you, but when I think "worthless" and "ineffective" the first thing that comes to my mind is "education" (actually, it's "abstinence education," but I've already ripped a Palin in this article so I'll say no more). After all, the only thing education does is teach us how to read and write and balance our checkbooks, which in the future will be completely outsourced to India with the rest of our jobs. Appropriately, Corbett has proposed cutting more than $2 billion from Pennsylvania's education budget and reducing aid to colleges and universities in Pennsylvania by 50 percent.

In light of this awful fracking predicament, Gov. Corbett has come up with a great fracking idea: frack any hole that can be fracked. While speaking to an audience at Edinboro University of Pennsylvania a few weeks ago, Corbett suggested Pennsylvania's colleges and universities could help out by fracking themselves, on their own land.

I, for one, think this is fracking brilliant. After all, college students drink very little water, and as long as these fracking chemicals do not make it into the local PBR supply, there's no risk there. And since many college students are strangely compelled to leave the region immediately after graduating, they'll only be exposed to four years—or so—of dangerous air quality. They could even think of it as preparation for living in New York City.

Now, I'm aware there may be critics of this plan. Of course, Corbett's plan would involve placing actual gas or oil rigs on our cherished and historic campuses, which may be an affront to some, but I firmly believe in making lemons into vodka lemonades. Universities will simply have to make the best of the situation, and they should be glad they are allowed to continue to exist at all. Therefore, I humbly submit the following suggestions to help allay the potentially negative effects of poisoning our students, and I daresay that in time, 80-foot tall derricks on college campuses will become as accepted and beloved as Starbucks franchises in your church and pop-up ads on your computer.

-To allay the potentially blighting effect of such industrial machinery in close proximity to classrooms, I suggest these schools should gaily paint them in school colors, perhaps with cute googly eyes or a menacing set of fangs. I can see it now, oil rigs pounding that hole, fracking away, dark royal blue and white faintly gleaming in the hazy smog of Happy Valley.

-On a lighter note, let's not forget the mindboggling variety of college-bar cocktails that could be constructed and named after the new local industry: Frack and Coke, Frackhattan, Fracktini, Frackarita, Fracky Mary, Frack Julep, Fracks on the Beach, Fracky Navel, or even the Motherfracker. Add some Red Bull and you've got a Frack Bomb. My liver quivers in anticipation.

Am I serious? Abso-frackin-lutely. Hell, why stop there? Let's take it a step further discuss some more ways we can get these freeloading colleges and universities to stop suckling at the pubic teat. They should rent unused dorm space to the department of corrections to house dangerous prisoners. They should require students to help generate a portion of their own power by mining their own coal and walking treadmills several hours a week—this would also cut down on the obesity epidemic in America. They should also allow students to eat only that which they can hunt or kill with their own two hands because this tea-bagging, self-reliance movement that continues to search for the moral justification of greed is hell-bent on eliminating anything that cannot pay for its own existence demands that we all take personal responsibility for our own interests, roads and national defense be damned. Then, we could all live in caves underground and…no wait, scratch that.