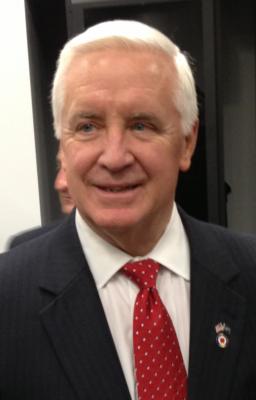 The Internet can be a cruel mistress. And when it comes to Gov. Tom Corbett, Politics PA Managing Editor Nick Fields sums it up nicely with his lede: When it rains, it pours.

What he's talking about, of course, is Corbett's defense that Pennsyvlania's job economy is healthy, boasting 250,000 currently available jobs and that if folks really wanted them, they'd go check out Jobgateway.pa.gov.

Like any good journalist, the Pittsburgh Tribune-Review's Brad Bumstead did just that. What he found was that, yes, there are a lot of jobs posted there -- including ones that advertised: "hot mom and daughter combos" and "young busty females between 18-45," as well as a car date job offer seeking "a sexy woman older than 18."

Although the site is monitored for posts that, well, aren't the typical jobs one would be looking for when they head to a website with the URL "Jobgateway.pa.gov," the ads -- which found their way to the site via Craigslist and were posted anonymously -- were still there. And yes, while these ads represented only "0.002 percent of the 250,000 jobs listed on the site," according to a Corbett campaign spokesman, there were there, ready and ripe for an easy political gab and joke -- of which Corbett ended up being the butt because, again: the Internet is a cruel mistress regardless of percentages.

But this isn't the first time Corbett's been an easy political punching bag. Just recently, there was the inappropriate-email scandal -- you know, the one where former Corbett staffers were sharing sexually-explicited emails when he was the Keystone State's attorney general. During an Oct. 1 debate, Corbett said that he wished he had gotten the email.

Of course he intended the statement to suggest that if he had received the email, he would have taken action, stopping the unbecoming behavior of his staff. But it's easy to take that out of context and give it the ol' eh-oh!

But this isn't the first time Corbett's likely wished he had a physician on staff to immediately remove his foot from this mouth. Remember the time he attempted to apologize for an analogy a staffer made comparing gay marriage to the marriage of two 12-year olds as "illegal"? Corbett said a better analogy would be one of brother and sister, for which he later went on to issue another apology. The gasp of the news anchor interviewing him on live TV that immediately follows that statement says it all.

So what's this all add up to? Corbett is already facing an uphill battle. Politico has Corbett trailing his Democratic challenger, Tom Wolf, by quite a bit, meaning that Corbett could become the first incumbent Pa. governor to not win a second bid to lead the state. Then pile on these gaffes, the headaches that compound frustration, and things are only going to continue to get worse for the Cor-bott.