Credit where credit is due

The San Antonio Spurs are quietly competing at a level that has many people, well, frankly, not talking about them. 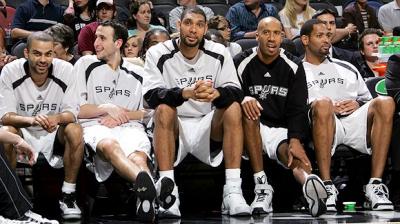 The San Antonio Spurs are quietly competing at a level that has many people, well, frankly, not talking about them.

The Spurs are atop the Western Conference Division and hold the best overall record in the National Basketball Association at 46-10.

But no one talks about it.

Many forget that head coach Gregg Popovich has guided his team to four NBA World Championships in 1999, 2003, 2005 and 2007. In 15 years at the helm of the San Antonio Spurs, Popovich has had only one losing season.

This year, the key to the Spurs' success has been balance. Tim Duncan (13.4 ppg) no longer has to score 20-plus points a game for the team to win.

In his second year, Blair has taken on the team's persona, battling and banging under the boards each night. A second-round draft pick in 2009, Blair has become a carbon copy of the Spurs organization.

But no one talks about it.

Let's face it; the Spurs are not your so-called glitz and glamour team like its NBA counterparts Los Angeles Lakers, Miami Heat, New York Knicks or Chicago Bulls. It isn't in its makeup. A small market team made of recognizable (not super star) names.

Attention grabbing headlines? Leave that to Denver's Carmelo Anthony, Miami's Big Three and the Clipper's sensation Blake Griffin. The Lakers' poor, inconsistent play is of more importance than a Spurs win over a top-tier team.

In a world of evolving technology and the 24-hour news cycle, fans want to be amused. Fans crave instant, up-to-the-minute sound bites, the drama and conflict.

The NBA is an entertainment league coupled with celebrity notoriety, mixed with gossip headlines.
(For those wondering, Khlomar just released their newest fragrance, Unbreakable, and Kim Kardashian has made Kris Humphries a household name).

The San Antonio Spurs have chosen not to go that route. Simplicity works for this team.

I think it's time us sports fans need to give credit where credit is due: to the San Antonio Spurs.