Critical Race Theory a Distraction from the Real Issues

A conversation with Dr. Parris Baker refuting claims about CRT 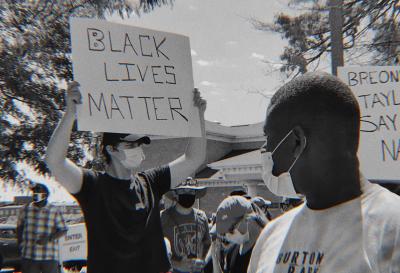 Contributed photo
Scholars such as Dr. Parris Baker, a social work professor at Gannon University and prominent voice in Erie's Black community, disagree that Critical Race Theory is the biggest issue at hand in America's fraught and tangled history of race relations.

By: Chloe Forbes Known as "Black Magic" or "Buckeye Bullet," Jesse Owens won four gold medals at the 1936 Olympic Games and is widely regarded as one of the greatest athletes in track and field history. It was a moment of awe as he broke from behind and shot to the front, crossing the finish line in first place.

And for that moment in Germany, America embraced him. Then, he came back to his country and was inferior again — an oxymoron.

"If we're winning, you're on the team; but if it's you and I, there's not equality. There's not equity," said Dr. Parris Baker, a social work professor at Gannon University and prominent voice in Erie's Black community. "And it's a very confusing thing to untangle. Critical Race Theory (CRT) says let's take a critical look at that."

Being so fluid currently, CRT has no set definition, but rather provides a lens through which to examine a situation.

Why was Jesse Owens placed on a pedestal in Germany, yet when he returned to the United States, he and every other Black athlete was not invited to the White House the way the white athletes were? CRT asks why these inequalities occur and what systems are in place that sustain that pattern.

CRT seemingly dominated headlines in 2020 when state legislators from Tennessee to Idaho lobbied for a ban on the practice being taught in classrooms.

So far, CRT has been outlawed in 19 schools, but it begs the question — when has CRT ever been used? In Erie County, CRT has never been taught or used in curriculum.

"CRT is not the issue," Baker said. "There are other things going on, other things much more deeply rooted. CRT is a distraction to the real problems."

The death of George Floyd caused outrage as people asked themselves, "How could that happen in our America?" As the sobering truth about our racial reality grew closer, people began to divert the conversation.

Baker said it takes courage to face that truth, and rather than admit something that might take away an oppressor's superiority, they stay quiet.

In a speech prior to Martin Luther King Jr.'s "I Have a Dream," Rabbi Joachim Prinz said, "The most urgent, the most disgraceful, the most shameful, and the most tragic problem is silence."

The speech, referring to the rise of the Nazis in Germany, indicates that silence and "a nation of onlookers" is what led to one of the worst periods in history, and what doesn't addressed gets repeated.

"There's a lot to be learned if we studied what it's like to be Black and American," Dr. Baker said. "Not talking about how horrible white people were. That's not what I'm talking about at all.

"How a group of people survived, and in some cases, thrived, under some of the worst conditions ever in America. We need to tap into that kind of intellect and intelligence and tenacity."

Under oppressive laws, a group of people continued to find ways to create science, math, and language without access to technology or schools. They sang songs praising the Lord as they were treated so poorly. In the case of Baker's grandfather, he was made to dance at gunpoint.

Baker re-emphasized that CRT is not the issue. CRT can assist in seeing systemic oppression, but it is serving as a distraction from contempt that is deeply rooted in America's history. Policy plays a large role in this conversation.

For instance, Mississippi legislators didn't motion to abolish slavery until 1995 — 130 years after the passage of the 13th Amendment which made it federal law— but the state law wasn't ratified until 2013 (because the U.S. Archivist was never notified). CRT can help identify that until 2013, African Americans still were not equal citizens in America despite the Declaration's claim that "all men are created equal."

Asking why it took 18 years to make that law actually legal is part of the larger conversation to be had.

Looking at past policies, it's evident that there was never equality. A large factor in today's inequality can be attributed to property ownership.

Laws like the GI Bill and the Homestead Act of 1862 were used to amass wealth and distribute more property to white people.

A prevalent issue in Erie, redlining is the root of many environmental and consequent health injustices faced citywide, with Black citizens historically refused home loans and insurance in more desirable neighborhoods creating a form of de facto segregation.

Not only can Americans learn from their history, but Dr. Baker says it is important to learn about history.

"Just teach American history," Baker said. "Don't call it Black or white, call it history. All of it. Just teach history. And there are a number of different narratives that can contribute to that history, so let's take a look at each of them."

Baker came up with what he refers to as the AAA membership — acknowledge what happened, apologize (not for history but for the times we withdrew from conversations), and become an advocate for change. He calls for all people to be AAA members.

He also stated that the conversation that needs to be had is between white people. That serious dialogue needs to happen, addressing the full spectrum of history and how their lineage let that happen.

"How does one become a Christian? Believe in your heart and confess with your mouth," Baker said. "It's the belief and the confession. This transformation is a heart transformation … We need the same heart transformation to say, 'I've been born in a racist society that has benefited me.' And until we get to that point where we do self-examination, we're gonna be stuck right here."

Hear Dr. Baker speak about CRT at the Jefferson Educational Society Tuesday, Feb. 8 from 7 p.m. - 8:30 p.m. as he presents "Critical Race Theory Is Not the Issue: Claims, Fears, And History."

Critical Race Theory Is Not The Issue: Claims, Fears, And History

Education & Instruction
2/8/2022 from 7 PM to 8:30 PM
Jefferson Educational Society, 3207 State St, Erie, PA 16508
CRT is not the Issue! Dr. Parris Baker will address the fears that "have spurred school boards and state legislatures from Tennessee to Idaho to ban teachings about racism in classrooms. The speake...