Curious creatures at home and abroad 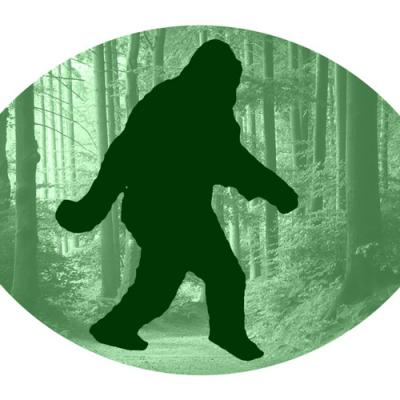 "I love Erie, but there's just not enough biodiversity for me here."

And off goes yet another friend or loved one, station wagon heaving from a life of lies packed stubbornly away. Never mind the 400 species of terrestrial vertebrates dwelling in Presque Isle State Park or the 100 unique species residing at the Erie Zoo, all readily observable and authenticated by science. There are bigger and better things out there and authors Stan Gordon (Astonishing Encounters: Pennsylvania's Unknown Creatures) and Michael Newton (Strange Pennsylvania Monsters) have the (predominantly hysterical) eyewitness accounts and amateur sketches to prove it.

Pennsylvanians have beheld just about everything over the years – from a tailgating pterodactyl in Jeanette (observers noted that it flew "like a complete and utter pteroasshole," trailing a helicopter at close range) to a half-cabbie/half-kangaroo in Lancaster County (it "shouted something in a foreign language" before hopping into the woods, according to a witness). Given these reports, it's easy to see how our town might lack for culture. But are we really missing out on anything?

Anyone claiming to have encountered an unusual creature will swear they are f'real – but are they f'real f'real? That is at the discretion of a cryptozoologist, or a "studier of hidden animals."

Anyone claiming to have encountered an unusual creature will swear they are f'real – but are they f'real f'real? That is at the discretion of a cryptozoologist, or a "studier of hidden animals." Paranormal cryptozoologists (such as Gordon, a former state director of the Mutual UFO Network) are more flexible as to what constitutes "reality" than "flesh-n-blood" cryptozoologists (Newton), who require physical proof. Before you collapse from a scoffing fit, bear in mind that a few incredible species have been (re)discovered, such as the coelacanth (a fugly prehistoric fish) and the giant squid (the "Kraken" of seafarer lore).

In general, cryptids (i.e., the hidden animals) are lumped into four major categories: 1) animals resembling extant species but with extraordinary variation(s) in size or appearance, 2) OOPs – known species that are "out-of-place" in a given area, 3) species thought to be wiped out locally or globally, which didn't get the hint, and 4) the "what-is-it? – a monster that defies all conventional knowledge (i.e., I hope you stocked up on scoff-suppressant lozenges because you actually may die of scoffing fits).

Description: Pennsylvanians have had more run-ins with the 'Squatch than any other cryptid by far (490 over a span of 175 years, by Netwon's count) – but somehow we have diddly-'Squatch to show for it. The typical Sasquatch is approximately 6.5-10 feet tall, with gangly limbs, little-to-no neck, and a conical head – and covered in various shades of shaggy fur with a texture "like pine needles" (per Crawford County witness Caroline McAdoo).  Despite evidence that Bigfoot may use product, its hygiene leaves much to be desired, with its odor compared to "a dead skunk," "rotten egg," or an "open sewer." It walks with an unusual gait, with long strides that are almost mechanical in appearance. Its expressive eyes glow an unearthly fluorescent red, green, or orange (blank, expressionless eyes seem to be a recessive trait).

Behavior: Although the Sasquatch has been known to ravage human food supplies (Erie's 1891 Sasquatch reportedly drained the blood of 500-600 chickens – them ma'cluckas got cockadoodle-schooled), it is seldom harmful to humans themselves. However, it is intensely curious of our activities, sometimes displaying borderline voyeuristic tendencies (peeking through windows, hanging around popular makeout spots, etc.).

The best "record" we have of Sasquatch interaction is Jan Klement's Kong, published in 1976 by Allegheny Press (in Elgin, between Union City and Corry). In his narrative, Klement allegedly builds a relationship with a Sasquatch, even teaching it basic commands. Meanwhile, his relationship with his girlfriend suffers, as she accuses him of spending that man-on-mange bonding time with "some whore." Klement dumps a tearful Kong off in the middle of the Allegheny Forest, but it returns in less than a day. Kong becomes ill shortly thereafter and soon passes away. Respecting Kong's strict non-disclosure policy, Klement hacks up Kong's remains with an axe and buries him in West Virginia without snapping a single photograph.

The apple doesn't fall from the tree: Albawitches, or "apple-snitchers," are shorter, more slender 'Squatch relatives that peg picnickers with their own fruit. 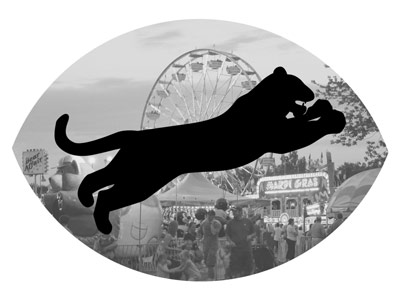 Description: Cougars once roamed Pennsylvania freely before being (seemingly) extinguished in the late 1800s. Modern sightings almost exclusively refer to "black panthers," although biologists have yet to recognize melanism (the gene mutation resulting in an all-black coat) in any big cat other than the jaguar or leopard. Titusville witness Judy Walters sighted a "shiny and jet black" feline on her property on Aug. 22, 1945, and a spate of panther reports followed in nearby Corry and Chautauqua County, New York. Titusville police blamed the usual "wrecked carnival" in New York state  – which was either a strong indictment of carnival workers or their own investigative prowess, since no documentation was provided.  Most estimates place the ABC at 3-4 feet long and 2-3 feet high with a "swishy" tail and "glowing" yellow eyes, tipping the scales at 100-plus pounds.

Behavior: Like absentee parents, ABCs only show up on a whim – and never when you need validation the most. There is some speculation that black panthers are shapeshifters, supernatural entities (some say the spirits of native tribes dispossessed of their land) lunging through hoops in the interdimensional fabric as if it were a circus act. Occasionally those big paws of theirs hit a snag in the time-space draperies and they appear in the temporal realm, only to dissolve again into nothingness. Purrposterous?  It's all a matter of purrception. 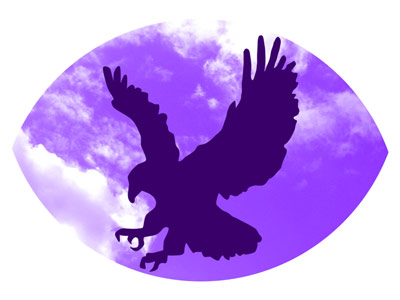 Description: Most concisely summarized by a Derry Township man as "an eagle on steroids." These raged-out raptors boast bodacious wingspans of 12 feet or more, with diamond-shaped tails, foot-long hooked beaks (sometimes with tuft "goatee" underneath), and grip strength so insane they can pluck deer and livestock off the ground (without the aid of straps or chalk) Standing up, they can look a seated human straight in the eye – although you might not want to get into a staring contest with one, because Native American legend has it they are equipped with lightning-vision (power metal lyricists everywhere are drooling). The last non-mythical birds to approach such stature were the prehistoric teratorns, which went extinct 10,000 years ago.

Behavior: Native American mythology characterizes the Thunderbird as wrathful and vengeful, but modern examples have at times proven otherwise (such as the specimen that rescued a snakebitten hiker in the 1930s). Takeoff can be labored, but once airborne they are more graceful than a stunt plane, gliding on air currents with a sound like "flags flapping in a storm" despite being minimally flap-happy with little wasted motion. Who knew bird-watching could be so extreme?

Related: The Fayette County Dragon, because the only thing more bitchin' than an electrified eagle is a fire-breathing reptile.

B-list Bessie hasn't gotten the press that her more popular plesiosaurority sister (as if!) Nessie has, but there have been whispers of her existence among the Lake Erie waves for decades.

Description: B-list Bessie hasn't gotten the press that her more popular plesiosaurority sister (as if!) Nessie has, but there have been whispers of her existence among the Lake Erie waves for decades. A boy and his father allegedly caught her napping on the north shore of Presque Isle in the mid-90s, a spectacle the boy recollected so vividly he was able to sculpt it from memory decades later. 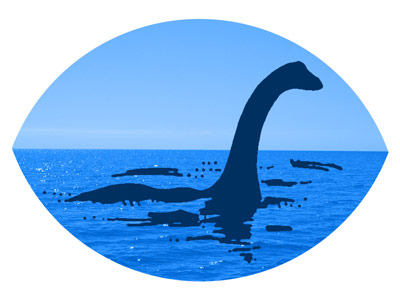 Bessie was an estimated 40-45 feet long and 15 feet high at the shoulders, with blue-gray skin, an elongated neck, and an enlarged head and flippers like that of a sea turtle.

Behavior: Bessie is typically regarded as a benign and unobtrusive presence. She could afford to be more body-positive, as the witness noted her voluptuous hind end obscured by tall grasses. Don't be shy, babygurl – you're beautiful just the way you are.

Total opposite: The Storm Hag, a strong, independent green woman with catlike eyes, shark-like teeth, and poison-tipped claws. You're having what she's having for dinner – if you're lucky, a lungful of pristine Lake Erie water. If not, a lungful of algae-infused, postindustrial bilge. 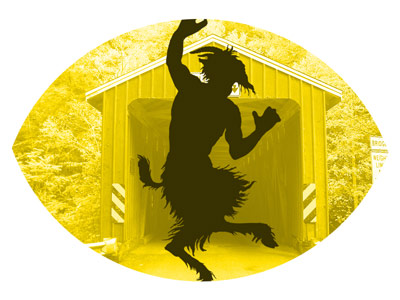 Description: Peach Street traffic isn't the only nightmare concerning U.S. Route 19 – this half-man, half-goat provided an equally valid reason to stay home back in the day.

Behavior: Sheepman's staunch support of abstinence education was something approaching zealotry. He jumped from the rafters of the Waterford covered bridge onto parked cars, tearing the rooftops away to expose young fornicators to Heaven's judgment*. He also singlehandedly raised the price of goods at the local farmers markets, massacring livestock at will. Talk about fleecing paying customers!

*Aside: Despite their intrusive reputation, cryptids do seem to have at least an elementary grasp of boundaries. Sure, they'll disrupt pairs of curfew-breakers "fooling around," but I've noticed none of these narratives begin with "On our wedding night, shortly before we consummated our marriage …" or "As my immediate family gathered around to draft my will …" or "Whilst we hotly debated painting the living room a warm or neutral color …" #InterruptionWithIntegrity

No less a man: But not much of a moth was West Virginia's Mothman, a sort of mutant archangel with a good-sized bug head (endowed with the prerequisite bulging red eyes) on his broad bruh-shoulders. The feathered fiend ostensibly emerged from a disused munitions facility locals dubbed the "TNT area" in the mid-to-late 1960s and proceeded to harass teenagers in Point Pleasant, West Virginia and later the outskirts of Pittsburgh after dark.

Mothman strikes me as a spry fellow who simply needed a more productive outlet for his energy – for instance, instead of chasing convertibles at speeds in excess of 100 mph, perhaps he could've taken up cryptozoology?

As it is with cars, so it is with monsters, or dreams – you may never catch 'em all, but sometimes it's the belief that's worth pursuing.