Out of state resident transferred to St. Vincent Hospital 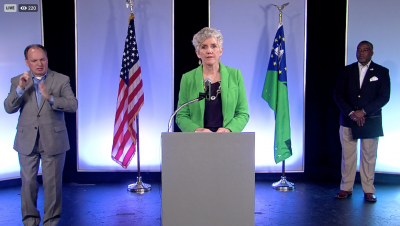 Kathy Dahlkemper began her live address announcing that there were three new cases of COVID-19 in Erie County, bringing the total to eight. Two of the cases are in their 60s, with one in their 40s. In at least two of these cases, patients had been traveling.

Dahlkemper stated that this would be the last time she would address each individual case in terms of the presumed reason for infection, as numbers are expected to grow.

She also noted that there was a 29-year-old individual from out of state, traveling through Erie County that was transferred to St. Vincent Hospital. Since this individual's address is in a different state, this is not a factor in Erie or Pennsylvania's numbers. It was later noted that this individual was involved in a life-sustaining business, with the timely actions of the patient and their employer being commended by Dahlkemper.

Later in the broadcast, Dahlkemper underscored that Erie's most likely threat of spread would be due to travel.

So far in Pennsylvania, there have been 2,219 cases of COVID-19, with 22 deaths, two in Allegheny County and two in Butler County.

Dahlkemper spoke again about the recently opened "Rumor Line" at (814) 451-6986, where residents can call in regarding rumors or gossip that they would like to be clarified. She urged those who see large groups gathering to call the Erie County Department of Health (ECDH) at (814) 451-6700, or visit ECDH Info at eriecountypa.gov.

Ten more field inspections were made to local businesses, completed by local environment task force investigators, with all ten passing. Yesterday, 18 were made, with 16 passing.

Citing the Erie Chamber of Commerce as the lead for small businesses, Dalhkemper instructed business owners to reach out to them for questions and information on assistance. The Chamber urged organizations to apply for assistance as soon as possible.

ServErie Executive Director Marcus Atkinson also addressed the public. For those interested in helping, United Way and ServErie encourage going to PA211NW.org for more information on how to get involved.

Dahlkemper declared that Erie County is essentially "ahead of the game," stating that "many other counties have called us," citing Governor Tom Wolf's Stay-at-Home orders issued for seven other counties in Pennslyvania – primarily in eastern Pennsylvania – earlier in the day. She noted our enforcement team and cooperation with local law enforcement.