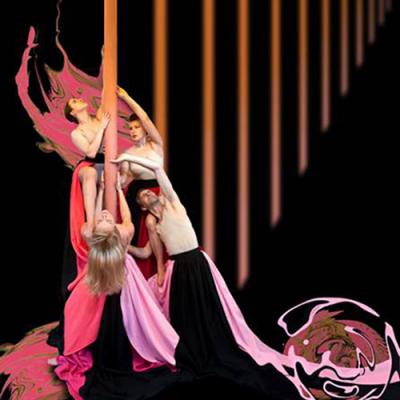 "Markers," says Dafna Rathouse-Baier, Dafmark's choreographer and co-founder,"are a collection of moments that make it impossible not to respond, moments that shatter the boundaries of one's intellect, emotions, and thoughts, that change perceptions, taste, and esthetics."

On April 1 and 2, to celebrate these markers over the past 25 years of the company's existence, Dafmark is mounting A Still Unfinished Journey, a multi-genre, five-part performance with dance, poetry, and visual art.

On April 1 and 2, to celebrate these markers over the past 25 years of the company's existence, Dafmark is mounting A Still Unfinished Journey, a multi-genre, five-part performance with dance, poetry, and visual art.

According to Rathouse-Baier, each segment will be a tribute to a different marker in the creative life of the company, such as three-quarter time, which Rathouse-Baier calls an eternal rhythm, and poetry, which she considers a partner to dance.

In addition, the performance will pay homage to Pina Bausch and Alvin Ailey, whom she sees as pivotal players in the field of dance. Rathouse-Baier says they "left an indelible mark on me, in part because of the luck and privilege I had of getting to know them and their work."

Dancers for the performance include Jennifer Dennehy, Megan Sabatini, and Charlotte Twitchell, with a guest appearance by Scott Heinrich. Charlie Corritore will narrate, but he will also act and contribute poetry. Marsha Langman Cisek will create a visual work of art while the performance unfolds. The music used will range from classical to contemporary including spirituals, featuring works by Tchaikovsky, Schnittke, David Hope, Khachaturian, Schumann, and more.

"Twenty-five years of incredible friendships, artistic encounters, a wealth of creativity, and unwavering support from the community has made Erie our home," says Rathouse-Baier. "Thus, this is a journey that is still ongoing."

The markers evoke a motionlessness for her as well. "Think of a moment that affects a person to such an extent that time stands still and that moment accompanies you in your journey."

When all of these elements – the markers, the influences, the artistic encounters – are juxtaposed, Rathouse-Baier says "they represent the essence of that which has given so many facets to Dafmark for the last 25 years in Erie, and keeps on feeding its creative journey."