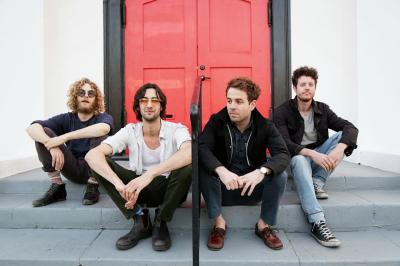 Dawes, led by singer-songwriter and guitarist Taylor Goldsmith, will bring its lightly synth-sprinkled folk-rock sound to the Chautauqua Institution on Friday, Aug. 16.

Each time Dawes goes on stage, frontman and guitarist Taylor Goldsmith says, the band is telling more of an ever-expanding, always deepening musical story, most often to those who have been reading the tale from its beginning.

"We've been doing this for a little bit," Goldsmith said in a recent phone interview. "We're on our sixth record now. It's like if you read 800 pages of the book rather than 50, the experience gets richer and richer and deeper. That definitely happens for us. I don't know what it's doing to the audience. We have this deep catalog to explore and we want to take them along with us."

That exploration will, of course, include songs from *Passwords, Dawes' latest album, and its first to hit the *Billboard magazine Top 10. But those songs may or may not be featured in the set, which changes from show to show.

"We're trying to create that live culture where fans go and have a completely unique experience night after night," Goldsmith said. "We might start with the same song. Then we try to explore the far reaches of our catalog for the audience and for us."

Dawes, especially early on, was tagged as retro, a band that hearkened back to the Laurel Canyon singer-songwriter folk-rock sound. It's easy to understand why the group was hit with that label by the hipper-than-thou set, Goldsmith said.

"There are certain things we do that create an easy target," he said. "We let the lyrics be the focus of the song. Which is not what you hear with some of the zeitgeisty bands, like the War on Drugs, whom I love; their lyrics are usually buried. And [for] The National, one of my favorite bands, [frontman] Matt Berninger writes in fragments, in a very impressionistic way."

Nor is Dawes trying to reinvent the wheel or come up with a previously unheard music.

"There have been artists, whether that's Radiohead or Joni Mitchell, who have been creating a new thing in music, at least to me," Goldsmith said. "Then there are artists like Tom Petty and Bruce Springsteen, who are two of my favorites, who aren't reinventing rock 'n' roll. Their personality and writing are strong enough to carry them."

"Dawes is a rock 'n' roll band playing guitars, writing songs, working in a certain tradition," he said. "Through our attitude and personality, I hope, you can hear a song and go 'that's a Dawes song.'"

Goldsmith has been crafting those Dawes songs for a little over a decade — since he discovered he wanted to write and make music for life.

"I found out pretty early — well some wouldn't say it's that early, around 20, 21 was when I was really hit by the songs of Bob Dylan, Leonard Cohen and Elvis Costello, those three," he said. "All of a sudden the appeal of lyric writing made me want to be a musician for life.

"When I discovered Bob Dylan and Leonard Cohen, I could explore the records that inspired me on a different level and that led me to Joni Mitchell, who is maybe my favorite of all time, and Warren Zevon," Goldsmith said. "Those artists that wrote the lyrics that you try for."

Others cited by Goldsmith — Browne, Paul Simon and Kris Kristofferson — make his influences a who's who of great songwriters of the rock era.

Dawes, which grew out of the band Simon Dawes, was put together by Goldsmith and his drummer brother. Appropriately enough, the band recorded its first album, *North Country, direct to tape in a Laurel Canyon studio in 2009.

By 2016's *We're All Gonna Die, Dawes had added synthesized sounds to its organic folk-rock mix, crafting an instantly identifiable sonic palette, a sound that is further enriched on *Passwords.

Starting off with the opening track "Living in the Future" and extending through the insightful "Crack The Case," *Passwords ventures some into topical territory. But Goldsmith's political and social references aren't overt.

"When everything is very obviously and intentionally political, I feel like the buck stops there," Goldsmith said. "It becomes something easy to toss aside at that point. When you talk about the undercurrent of the political opinion, you're talking about what it's like to be a human being. When you break it down to the human level, it's hard to deny people's thoughts and feelings.

That said, Goldsmith realizes that having that conversation means, to some measure, accepting or at least trying to understand viewpoints with which you disagree.

"I'm not saying there aren't disturbing things that are going on that bother me  — there's racism, there are racist statements," he said. "But I think some of that is a byproduct. That someone says 'the reason I'm against immigration is I lost my job and can't take care of my family,' they're entitled to that opinion."

"Then we can have a conversation, that we're all the same," Goldsmith said. "We want a good night's sleep, a good meal and to take care of the people we're close to. That's the same whether they come from Minnesota or Syria."

*Passwords, however, isn't only topical. It's got a heartbreaking story song in "Telescope" and a good share of songs about breaking up and finding new love.

"With this record, I was thinking a lot about what it meant to be alive in 2017-2018," Goldsmith said. "But at the same time, I was also falling in love and getting engaged. So the songs are about these things, bringing together these things."

For those who don't follow celebrity news, Goldsmith was falling in love with actress Mandy Moore — beginning a relationship that, he said, has already profoundly changed him.

"What's helped me in living through these times is living for someone else, living for love," he said. "Putting somebody before our personal concerns can be freeing."

Now Goldsmith and Moore are apart from each other for awhile as he heads out on the road with Dawes while she works on her projects.

"We're getting good at it," Goldsmith said of their separation. "I was home for a lot of months and left the other day. It was hard. I don't like being away from her. But we know that to do what we want, to put that out in the world, we have to be away from each other.

"For us, it's like eating your gross veggies or going to the gym when you don't want to," he said. "You do it. Then it makes us remember that longing and it keeps us from every taking what we have for granted."

And, Goldsmith said, Dawes has to go out and play shows for those who have become attached to the band over the last decade. He doesn't take that for granted either.

"Coming out to see a live show isn't the craziest thing you can do these days," Goldsmith said. "For people to come out to see us, we want to make sure they're getting absolutely every dollar's worth and (we're) leaving everything out there that we can…That's what our heroes did. I feel like that's the job. That's when we feel most satisfied and proud."