Dawn of the Planet of the Apes

If Transformers: Age of Extinction depleted your faith in the high-budget-summer-blockbuster subgenre as a whole, Dawn of the Planet of the Apes is the wake up call that lets you see just how potent and brilliant CGI-powered thrillers can (still) be. 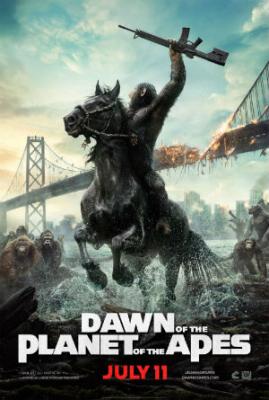 If Transformers: Age of Extinction depleted your faith in the high-budget-summer-blockbuster subgenre as a whole, Dawn of the Planet of the Apes is the wake up call that lets you see just how potent and brilliant CGI-powered thrillers can (still) be.

2011's Rise of the Planet of the Apes first introduced us to Caesar and a band of other genetically empowered apes (they gained human-like capabilities in a test lab from an experimental drug that would aid in brain repair) who escaped brutal test conditions and staged a full fledged uprising in the city of San Francisco. Dawn takes us a decade ahead; the apes, led still by Caesar (Andy Serkis, in brilliant motion capture) have formed a colony in the forests of Marin County, across the Golden Gate Bridge from the human survivors of apocalypse by lethal virus and world turmoil.

What sets Dawn apart from middle-of-the-pack post-apocalypse drivel is that it's not primarily about an end to humanity, it's about a beginning to a world where apes have transcended human cruelty and oppression to form an intelligent and society built on peace and loyalty. The apes communicate with hand gestures and simple sentences, a result of their evolution from the drug they were given years prior.

On the other side of the bridge, the humans have tried to rebuild a society of their own, though they can only progress so far without the aid of hydroelectric power, the source of which lies across the bridge far into ape territory.

Caesar, who recalls the benevolence shown by James Franco in the first film, agrees to help the human scouts Malcolm (Jason Clarke) in their search for power. But with a reminder of human cruelty and abuse, fellow ape Koba (Toby Kebbell) warns Caesar of humanity's threat, insisting that they cannot be trusted, and that further interaction will lead to inevitable war.

Dawn… is remarkable in that it depicts this not only human, but entirely animal need to destroy and conquer. Just as Dreyfus (Gary Oldman), the leader of human society insists that the apes must be eradicated and conquered, Koba maintains that humans are capable of nothing but evil, and must be violently eliminated.

It's a fascinating continuation of the first film's provocative thematic material, which potently addressed the horrific consequences of animal testing and forced us all to give a shout of "hoorah" for the apes that gave humanity what it had coming. The second film, with this idea present, albeit more subtly than in the first, boldly asserts that the essence of war and of violence are universal to life, both of man and ape. It's an alarming meditation on the limits of human-animal and human-human interaction, and it's an allegory for each that harbors endless potency and relevance.

Even aside from the bloodlust, the apes have developed what is a strikingly human way of life. Though primitive, their society is operated efficiently and peacefully, the apes exhibiting a resourcefulness that the remainder of the human race seems to lack. When one of the apes remarks that apes don't need power to survive, it's a startling look at the bare bones essence of  existence -- without fancy commodities and material psuedo-necessities (the first thing Dreyfus does when the survivors gain power is turn on his iPad). In a sense, it's also a meditation on the civilizational development that leads to greed and dependence on commodities, and it's a big inhibitor of coexistence.

In the vein of last year's Gravity, Dawn… is a movie that brandishes stunning technology without killing any brain cells in the process. Andy Serkis, the dynamo who's made Caesar the living, breathing, and feeling beast of a character in both installments, practically erases the line between human acting and motion capture enhancement. Every subtlety of his brilliant performance is captured on screen. It's sensational.

Writers Mark Bomback, Rick Jaffa, and Amanda Silver didn't write Dawn of the Planet of the Apes to be a full blown popcorn movie, and Matt Reeves didn't direct it that way. Reeves refuses to let the movie sink to the levels of apocalyptic action banality. His film shines with dramatic and ethical flare, and isn't afraid to get at the reality of what's happening in the midst of the film's  action vibrancy.

The Dawn of the Planet of the Apes may not be a classic, but it's a movie that more than lives up to it's multi-generational legacy while managing to make its own statement and vision. That's worth talking about.