Dead to Me Pours a Glass of Forgivable Twists

The second season of the Netflix series is eye-rollingly enthralling 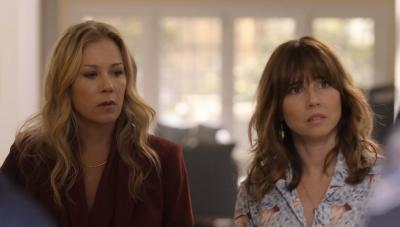 Viewers of the first season of Netflix's Dead to Me were served up something wholly captivating, with audiences being no doubt drawn in by the performances of the show's leads, Christina Applegate (Married... with Children, Samantha Who?) and Linda Cardellini (Freaks and Geeks, ER). The two well-established and widely likable actresses form an unlikely friendship in the wake of a tragedy.

The show follows a soap opera-like series of twists and turns, with cliffhanger endings in virtually every episode. We get to know the characters of Jen Harding (Applegate) and Judy Hale (Cardellini) after the two meet each other at a grief support group, and the events unfold from there. Though the second season quickly paints itself into a corner, it's thoroughly enjoyable and even more addicting finding out what will happen next. The gorgeous backdrop of Laguna Beach is on full display, including its lavish houses — Harding plays a real estate agent, after all. The series makes feeble attempts to underpin the class divide in seaside Southern California, as Hale struggles to make ends meet with her job at a retirement home.

The first season saw Harding and Hale (Cardellini) gravitate to each other, seemingly able to fill the voids left by their deceased spouses. We soon find out that though Hale's grief is not what it seems, Harding's is very real, having lost her husband in a hit-and-run accident.

It is soon revealed that Hale was responsible for his death, along with her ex-fiancé, Steve Wood (James Marsden). At the end of season one, Wood is killed by Harding after a confrontation at her home.

The second season opens with one of the most ludicrous tropes in fiction as Ben Wood, Steve's "semi-identical" twin comes a-knocking to track down his brother.

By the end of season two, you're numb to these kinds of plot twists, and it's for the better. Hale falls in love with Natalie Morales' Michelle, only to find her ex and roommate is the very person investigating her. We see a Tell-tale Heart style breakdown about Steve's body, a burned Mercedes, Frances Conroy as yet another eccentric mother character, and a police chief in bed with the (unseen) Greek Mafia. We even get a nice arc for Harding's son Charlie, played by Sam McCarthy.

At the conclusion of Season Two, there's an almost karmic swapping of accidental brutality, as the next season gets teed up when a hiker finds yet more evidence.

In the end, it's a guilty pleasure, an escapist white wine murder mystery chock full of comedic bits that's just too engaging to pause. — Nick Warren