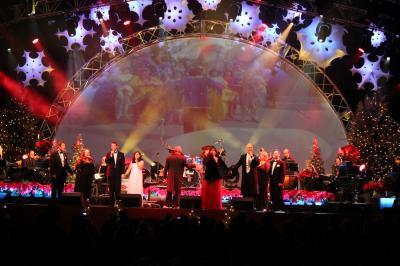 Next Friday, the "Ultimate Holiday Tradition" comes to Erie in the form of Mannheim Steamroller's Christmas tour. With 35 years of Christmas magic under their collective belt, the Omaha, Nebraska-based neoclassical new age group is bringing their annual holiday tour to The Warner Theatre this season. For this special performance, Mannheim Steamroller — billed as "the number one Christmas artist of all time" — will be performing the album that started it all, 1984's Mannheim Steamroller Christmas, in its entirety.

Mannheim Steamroller Christmas features a number of contemporary holiday classics, including their renditions of "Deck the Halls" and "We Three Kings." The album helped launch Mannheim Steamroller into mass popularity, landing them a number 50 spot on the Billboard Top 200 Album chart; it has since been certified platinum six times over by the Recording Industry Association of America and has sold over 3.5 million physical copies in the U S. alone. To further cement the album's legacy, a special 35th anniversary vinyl pressing of Mannheim Steamroller Christmas will also be available. For Mannheim Steamroller, the holiday is more than a tradition; it's a festive celebration that they would be more than happy to have the Erie community join them in. — Aaron Mook