Defect to Another Country at All An Act (Event Canceled) 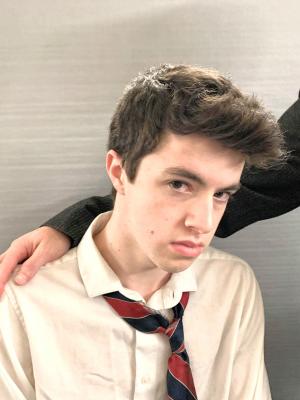 contributed photo
Logan Kearney stars as Guy Bennett, a British diplomat who spied for the Soviet Union, in All An Act's production of *Another Country.

NOTE: AS PER THE STATEWIDE CLOSURE OF ALL NON-ESSENTIAL BUSINESSES, ALL EVENTS FOR TUESDAY ARE CANCELED UNLESS OTHERWISE NOTED.

Alan Turing, the genius inventor of what would become the modern-day computer, suffered appalling treatment at the hands of the British government, after he was convicted of "gross indecency" and subjected to chemical castration. Two years after his conviction — for the crime of being a gay man living his life — and sentencing, Turing was found dead in his home, of an apparent suicide. He was only 41.

The hypocrisy toward and oppression of the LGBTQ+ community — coming so often as they do from the very upper echelons of the governments sworn to protect their citizens — have been historically despicable, and their effect on young people through the centuries has been profound.

Playwright Julian Mitchell examined a similar trauma in his 1981 work entitled Another Country, set in an exclusive all-boys public school in England in the 1930s. Based loosely on the youth of Guy Burgess (renamed Guy Bennett), who went on to spy for the Soviets, the story opens with the suicide of a young classmate who was caught having sex with another boy, setting off a chain of dramatic, vile, and disenchanting events.

Despite its privileged, insular setting, Another Country is a microcosm for society's tendencies to ostracize and punish the "other," while winking at expression of hatred and evil. That's what makes Another Country such a significant work, and such an opportunity for audiences to catch at the All An Act theater company, the second production of its 17th season.

Starring Logan Kearney, Roland Robbinson, Mikhail Ferreira, Giavanni Ciminella, Eli Coppock, Teddy Buchanan, Andrew Heidt, Stephen Slachli, Ben Robinson and Isaac Rutter, under the direction of J.D. Mizikowski with assistance from Marie Glaser, Another Country is a devastating and still-timely production that plumbs the depths of what motivates some to maintain the status quo and others to defect entirely. — Cara Suppa