The Razing of Millionaire's Row 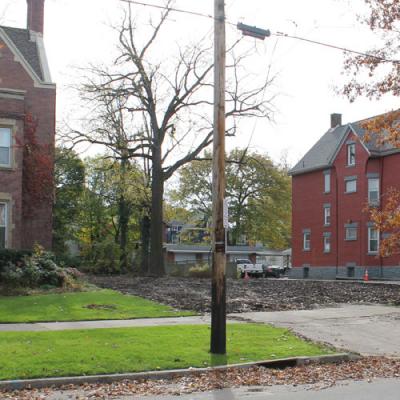 If we're just talking plain old human interest – about what life-dramas played out inside its century-plus-old walls – it seems safe to say there wasn't a whole hell of a lot of story inside the mansion that stood, until the recent past, at 329 W. Sixth Street.

The pages of local history record-books tell us the house – once-stately, soft blue- and white-brick, high rooftop pillars and wide windows facing the street – was built in 1898, and was first called home by Andrew McMullen, a local doctor and part-owner of an Erie coffin-making company, which saw some pretty heavy business in its heyday. Later on, and for a long while, the McMullen House housed a bunch of law offices. For close to the last decade, though, the house just sat vacant, aging, neglected; after a bank foreclosed on its previous owner in 2009, the property was picked up at a sheriff's sale by its neighbor, another local doctor.

But now, after a run-through in early October by a wrecking crew that the new owner hired, the structure itself – which local historians say had been, at the very least, one good example of Erie's best old Georgian Revival architecture – is history, knocked down to an empty lot, exposing brown earth that hadn't been turned over to the light of day for 115 years. Not far across the street from the locally famous Watson-Curtze Mansion, its demolition has created a noticeable gap in a heavy-traffic area of Erie's Millionaires' Row, a six-block stretch of notable old structures listed on the National Register of Historic Places.

The owner, William Paul Diefenbach, didn't return recent calls to his office for an interview with the Reader, but during the demolition, he told the Erie Times-News he plans on installing a Victorian-style garden on the lot next to his house, creating a pretty greenspace he feels will be a big improvement over the property's former state. And, like it or not, he's totally within his rights to have done that as the private owner of a private property. That's because while the National Register designation marks the district as being historically significant in total, it does nothing to protect the individual structures within it.

In the case of the McMullen House, what's done is done, what's gone is gone, and what will be will be. But that's where what's now an old story picks up and starts moving into the future.

"Quite a few people from the community saw that demolition as just something that was incredibly sad and disappointing," Melinda Meyer, chairperson for the local nonprofit Preservation Erie, told me during a recent interview. The City of Erie is "fortunate to have a couple of historic districts that are in relatively good condition," she added, and those "historic neighborhoods can be incredibly important" as both cultural and economic drivers.

But when you're talking about history, that just doesn't work so well if what's been is no longer there. So, the members of Preservation Erie, along with organizations like the Erie County Historical Society and other like minds are coming onto the block with some new ideas for holding onto Erie's past.

The aim, according to Meyer and John Vanco (executive director of the Erie Art Museum, who also sits on the Preservation Erie board), is to work with private property owners and city planning leaders to officially establish revamped zoning rules and regulations that would allow, at neighborhoods' request and discretion, for the establishment of locally-designated historic districts. The plan, they said, follows cues from related regulations already in place in cities like Buffalo and Charleston, S.C., and would, where put into effect, basically create a process through which any plans for demolition, or major building-changing renovations, would need prior approval.

Meyer said the plan could also work to establish or better utilize existing incentives (could be tax breaks, grant funding, or other attractive measures) for private owners to maintain, and not tear down, historic structures.

Meyer and others point out those incentives already exist, especially from the state level, and have demonstrable benefits – especially when put into place and used in the right ways at the hyper-local level.

Ask proponents of local historic districting to list out some real, good reasons for – and results from – plans like these, and they can. They could tell you, for first and obvious instance, that such districts provide solid, reliable vehicles for learning about and understanding a town's history, protecting its remaining tangible links to the past.

"These buildings contribute to our collective memory," said Meyer. "When we're demolishing even a single historic property, we are doing a disservice to our community. We're erasing a memory from our community."

And, they might add, those memories of what's been can also mean real money in: According to Preservation Erie, recent national data shows a vast majority – close to 80 percent – of all American leisure travelers are in it, wherever they're headed, mainly for the historical attractions. According to related statistics, those generally well-to-do types — the ones taking the walking tours of homes and stuff like that, going to fancy dinners, staying at the bed-and-breakfasts nearby — usually spend quite a bit more money (like a few hundred bucks more) than others.

So, there's that too.

Going further, they might suggest that setting up local districts could better protect investments in a city's historic properties, which usually appreciate faster in value than non-designated (and most other) parcels. The districts could also establish higher-quality design standards for renovations and new constructions within and nearby, while also creating better practices (more efficient, economical, and environmentally-friendly practices) for utilizing what's there – what was built soundly-enough to stand up to the test of time.

"We're trying to do the kinds of things that can be done, at the community level, to prevent this kind of thing" from happening again in the future, said Vanco, adding the plan is to "put a little bit of teeth" – specifics that aren't there now, that is – into the little that's already on the city's rulebooks about such matters.

Of course, taking it before the city's elected officials means Erie's public at-large – not just local history buffs with admitted biases on the issue – can and will have a say in how the plan pans out.

"The most important part is that community engagement," said Meyer. "These are decisions that really shouldn't [only] be made by some small group of like-minded people, [because they are] decisions that have an impact on the greater community."

Meyer said it's likely Preservation Erie's draft plan for new local historic districting may be presented to city officials for review sometime within the next few months. In the meantime, a volunteer task force has been meeting up, doing its homework, and planting the new plan's first seeds.