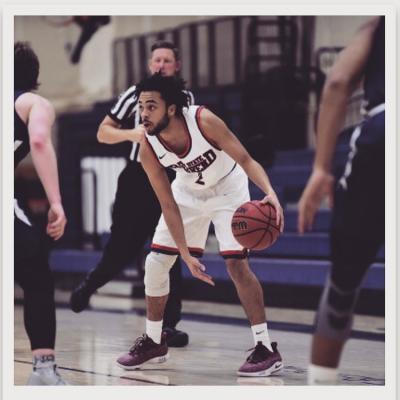 Everyone loves a feel-good story, and there is one unveiling itself here in Erie County that not enough people are acknowledging. The reason few have recognized it is because the person who has lived this journey is sometimes reluctant to talk about himself, the adversity he faced, and the mountains he has climbed to become the high-character guy he is today. The man being referred to is Penn State Behrend redshirt senior Derrick Clark. Clark is a 5'10'' combo guard who was born and raised in Erie.

His humble beginnings started at Woodrow Wilson Middle School where his love for sports really began to grow most. He then moved onto Central Career and Technical School (Central Tech) where he graduated in 2016. Clark is and will remain one of the last college athletes who graduated from Central Tech before East High School, Central Tech, and Strong Vincent combined to form Erie High School. He was on the last Central Tech basketball team to win a District 10 championship in boys basketball, and lists this accomplishment as one of his favorite memories to look back on. However, Clark is so humble and believes the 2013 and 2015 Central Tech boys basketball teams were two of the best teams the school has had that have not won championships.

"My freshman year of high school, our team was absolutely ridiculous," Clark said. "I was on the freshman team, and those guys were so good. My junior year, I did not start, but I was a role player for us and our team was really solid. We came a few seconds away from a district title, and that made 2016 so special for us. I was able to start as a senior and capturing the title was an important milestone for us," Clark continued. One of the key mentors for Clark during his high school days was Alex "Butch" Butcher. The two remain close to this day. Butch is involved in the Amateur Athletic Union (AAU) circuit in Erie, and has made a difference in many young people's lives, including Clark's. Clark is familiar with winning some championships, and he added to that as a member of the 2018-2019 Penn State Behrend Lions team that won the Allegheny Mountain Collegiate Conference (AMCC) title. However, this title came with him on the sidelines, and not by Head Coach Dave Niland's decision either.

Late in 2018, Clark was one of the key role players for the Lions after about a handful of games, but that is when the issues with his knee began. Clark was forced to miss the rest of the season, but he, fortunately, was able to redshirt and will be graduating in the spring of 2021. Coming back allowed Clark to join an already stacked senior class for the Lions that came within an in and out layup of winning back-to-back conference titles. While the Lions will miss the departures of a few key seniors, the returning team has a great deal of experience heading into next season that will make a huge difference.

In his redshirt junior season, Clark averaged 9.1 points and shot 39.5 percent from beyond the arc. It was a solid season for Clark who spent time both in the starting lineup, and oftentimes, the sixth man for the Lions. However, being a regular contributor for the Lions did not come easily at all. Looking back to high school, Clark had a lone offer from Pitt-Titusville to continue his basketball career. While Pitt-Titusville was not the right place for him personally, he felt Robert Morris in the Greater Pittsburgh area was a great fit. Initially, Clark was committed to Robert Morris and had his mind set on obtaining a business-related degree at a school with a great reputation for producing strong business grads.

However, a last-minute decision has ultimately changed Clark's life, and it appears to have for the better. The summer of 2016 was so legendary, Drake even made a rap song about it. It was definitely a legendary summer for Clark and some of his former AAU basketball teammates as well. Girard grad Dorian Connors, Northwestern graduate Russell Gariepy, and Clark decided they did not want basketball to end and were not ready to leave the Erie area either. The three of them discussed trying to talk on at Penn State Behrend, and it was a decision that made all the difference in the world for Clark and company.

Connors became the AMCC Defensive Player of the Year as a senior, Clark has become a key contributor at Behrend, and Gariepy has had success at Penn State Shenango and Penn State DuBois. While Clark made the team at Behrend, he did not see the floor much as a freshman. He scored just four points on the season, but looking back, he says he completely understands why he did not see much action. "I was definitely behind," Clark said. Other guys had been in more complex systems in high school, had been recruited, and were on the team to start school. I worked to learn the plays, get my body right, and learn as much as I could."

Coming into his sophomore year of college, Clark really formed a closer bond with recent Penn State Behrend grad and another former AMCC Defensive Player of the Year Malike Brinson. Brinson is a graduate of Collegiate Academy, but played his high school basketball at Central Tech with Clark. The two put in a great amount of work together, and worked out two to three times a day in order to get in better shape and have a better chance to play the following year. Brinson broke his right hand in the middle of the 2016-2017 season, and he was motivated to get in the best shape of his life while Clark was motivated to crack the rotation.

Looking back on this summer, it was filled with personal growth for these two with the guidance of Brinson's older brother and former Behrend Lion Keith Wallace who was also a former AMCC Defensive Player of the Year. Looking back on the summer of 2017 and the bond Clark has built with Brinson and Wallace, Clark said. "Keith and Malike have been a great support system for me. Each of us have had our ups and downs, but we have grown and been there for each other through so much. Malike and I didn't even have each other's cell phone numbers that summer, but we knew where we were meeting every single day and at what time. We held each other to a high standard and it worked out for us."

The work these two put in resulted in Clark cracking the rotation and even the starting lineup for a stretch in the season when starting point guard Andy Niland was sidelined with an injury, Brinson went from a rotational player to a two-year starter for the later part of his college career, and the two represented staying home to play their college ball. "Staying in Erie and going to Behrend allowed me to meet some great friends and teammates, save money, and obtain a great Penn State degree. I cannot ask for much more."

The Lions fell in the AMCC title game in 2018, and Brinson and Clark once again began the training that summer on a mission to win the AMCC title. While Brinson had a great senior season, Clark missed most of that season as previously mentioned, but he never let his attitude or misfortunate get in his way. Clark is as tough as they come, and an injury was just another obstacle he needed to find a way to manage.

During his upbringing, Clark moved from place to place around Erie a few times and had to even give up playing sports during his middle school years in order to best support the family. It was incredibly tough for Clark, but it certainly humbled him and showed him how to be appreciative of what he did have. The strength and appreciativeness he credits his mother Kathleen Ruf for instilling in him from an early age. The two share a special bond, and despite not being an avid sports fan, she has attended most of his games or watched online. "'If you are playing and this makes you happy, I am all about it,' my mom would say. My mom is such a strong person and has had a major impact on the person I am today."

She also taught Clark how to be humble and care for others, and for those at Penn State Behrend and around Erie, they know Clark as one of the best teammates they could possibly have. He has formed a special bond with Coach Niland who has been a great role model in basketball for Clark along with a bond with Behrend guard/forward Kenny Fukon. "Kenny and I have been getting a lot of workouts together, and I have been helping him get that confidence as a player. I had Malike and Keith [Wallace] to help instill that confidence in me, and the least I could do is help others gain that as well."

Heading into his final year as a Penn State Behrend student-athlete, Clark is excited and hopeful the Lions can capture another conference title and once again qualify for the NCAA Tournament. It would be a storybook ending for someone who has worked his tail off to become the man he is today. "The current situation has put a challenge in place of getting a workout in and shots up, but I am making the most of it," Clark said. He is excited to pack the Junker Center in the 2020-2021 season and is excited to see another one of his close friends Alex "Butch" Butcher in the front row cheering him on.

No matter where life takes Derrick Clark, he will always look back and think of Erie, Pennsylvania as the place that helped him become the person he is today. He is hoping to obtain a job in information technology or accounting upon graduation in the Erie area. For now, Clark will be enjoying one final summer of workouts and summer employment before embarking on his final year as a Penn State Behrend student-athlete.