The Happytime Murders Isn't as Shocking as It Thinks It Is 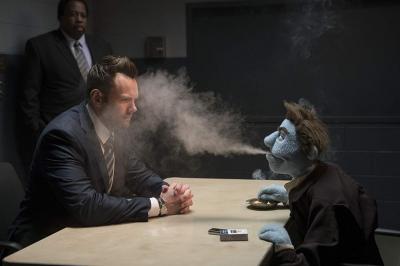 Making an adult-themed movie about a child-related subject is tough. The story needs to be really clever, otherwise it will just come off as try-hard edginess for the sake of edginess. That being said, I really hoped that Brian (son of Jim) Henson's detective noir The Happytime Murders could provide that clever story. Unfortunately, all I got was try-hard edginess for the sake of edginess.

The film follows a puppet ex-cop (voiced by Bill Barretta) who finds himself in the middle of a series of grisly murders involving cast members of an old children's TV show. He must now team up with his former partner (Melissa McCarthy) to find out who could benefit from these killings while also avoiding the FBI, who thinks he may be involved.

Much like Who Framed Roger Rabbit?, the film takes cues from film noir and popular children's entertainment to serve as a metaphor for bigotry. However, the film isn't nearly as smart as Zemeckis' masterpiece, so all that's left is the inappropriate humor. Even though the filmmakers clearly think they're making something really taboo, this film isn't nearly as gleefully offensive as something like Peter Jackson's Meet the Feebles. Unlike Roger Rabbit, the mystery and the bigotry subplot don't connect in any way and the mystery is so simplistic that observant audiences could guess it before the film's even half over. Despite all the creativity that went into the puppet effects, the plot is too bare bones to hold any interest. — Forest Taylor

Like, Y'know, Whatever: Eighth Grade is a Joyously Awkward Experience

by Forest Taylor8/15/2018, 12:30 PM
If anyone is interested in reliving those confusing, uncomfortable but ultimately harmless days of middle school life, you can't do much better
MuppetsThe Happytime MurdersBrian HensonMelissa McCarthyElizabeth BanksMaya RudolphJoel McHaleLeslie David Baker