Like, Y'know, Whatever: Eighth Grade is a Joyously Awkward Experience

If anyone is interested in reliving those confusing, uncomfortable but ultimately harmless days of middle school life, you can't do much better 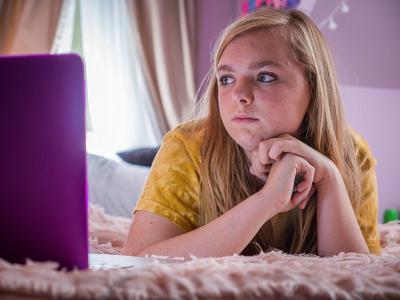 I didn't grow up with YouTube, Twitter or Instagram so I figured that Bo Burnham's directorial debut Eighth Grade would only be as an outsider's look into this new generation of kids. I never expected to become so emotionally invested in the story and to find such a familiarity with the central character. The film manages this feat by focusing on a teenage trait that transcends all generational lines: a little thing called awkwardness.

The film follows young Kayla Day (Elsie Fisher) as she tries to make it through the last two weeks of the minefield known as middle school. So far, her year has been disastrous, but she tries to rectify that by attempting to make new friends, get the boy she likes to notice her and work on her life advice videos on YouTube.

It's all pretty standard coming-of-age stuff, but Burnham makes it truly engaging with some slick direction; shooting everything in close hand-held shots so that we're always in the headspace of our protagonist. However, the real standout is the film's lead actor. Elsie Fisher is an absolute joy to watch. From her voice, her mannerisms to the fact that she constantly avoids eye contact during conversations, Fisher perfectly captures what it's like to be a shy teenager who doesn't quite have a grasp on who she is yet. It's a wonderful performance in a wonderful film and if anyone is interested in reliving those confusing, uncomfortable but ultimately harmless days of middle school life, you can't do much better than Eighth Grade. — Forest Taylor