Digging up the dirt on Soil Bae

Who is this man, and how did he get here? 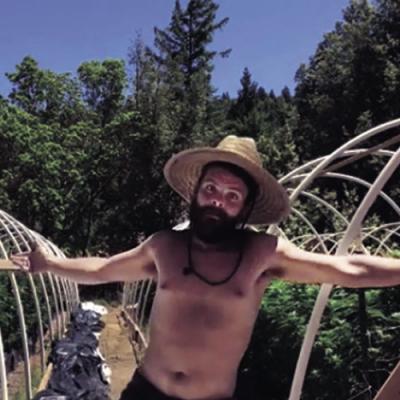 You may find yourself in another part of the world, and you may find yourself in a beautiful greenhouse. And you may ask yourself, well, how did I get here? This is the case for Erie native Sean Whaling. Erie residents may know Whaling from his involvement in the local art and music community, but the rest of the world now knows him as a happy cannabis farmer named "Soil Bae." One year ago, Whaling moved out west to work on a marijuana farm in northern California, and has since taken the Internet by storm. He posts hilarious videos, which usually involve him dancing around to popular songs by artists such as The Talking Heads or The Beach Boys, surrounded by the pot plants he is tending to while throwing soil around, hence the name: Soil Bae.

Whaling claims he started making the "Soil Bae ChroniCals" to show his friends and family back home what he has been doing out west, as well as to make a very hard job a little more fun. "I thought it would be a funny art concept because it's such hard work, and I'm kind of making fun of what hard work it is by not working," explained Whaling, who thinks that he really caught it at just the right time in the business when people needed a laugh. Other farmers in the area have applauded Whaling for his videos stating that they "needed that" after watching them. According to Whaling it can be a very depressing industry, the hours are long, the work is hard, and the solitude can really get to you. "I wanted people to see that you can have fun while you're working, no matter what your job is".

Soil Bae's original video (with the caption "when you workin on your grow and your song comes on") has gone viral, with over 11 million views on Facebook. You may be thinking "well that's cool, but why does it matter?"

Soil Bae's original video (with the caption "when you workin on your grow and your song comes on") has gone viral, with over 11 million views on Facebook. You may be thinking "well that's cool, but why does it matter?" Soil Bae matters because he has intentionally released one of the first cannabis videos to ever go viral. This may seem surprising considering marijuana is not a new trend, however legally being able to broadcast it is. In the past people growing and smoking pot were trying to hide it from the world, not brag about it. Remember Miley Cyrus' salvia moment? Soil Bae is a testament to the growing popularity and acceptance of cannabis culture as a legitimate industry, and a rapidly growing industry at that. The workers on these farms are mostly hard-working people from small rural towns, coming together to grow. "Up here cannabis farming is a completely normal job like working at a bar or beer distributor," says Whaling.

Soil Bae's fan base is not solely other people in the industry; random people from all around the world are reaching out to him. From California girls asking him to come ride horses with them to housewives in England. Whaling particularly enjoyed a message he received from a woman who informed him that she was from a little town near London and that all the mums from school get together to watch his videos and laugh. "They think I look like a cross between a British gardening show and Game of Thrones, because of my man bun and my beard I suppose".

The significance of Soil Bae is not lost on the masses; local news stations near Whaling a few towns over from where Whaling is employed have picked up his story, as well as other publications including Lost Coast Magazine and the Brooklyn-based magazine Modern Farmer, which have both written articles on Soil Bae. Whaling stated that he was even approached by a man who wants to make Soil Bae a character on his upcoming reality show. The popularity of his videos has spawned an Instagram contest, "The Soil Bae Challenge," where Soil Bae will award two tickets to the Emerald Cup (a northern California cannabis competition and music festival) to the best video of people expressing themselves while soiling. The Soil Bae videos have evolved from dancing though a field of cannabis to actual story lines. Whaling claims that he is not so much viewed as a celebrity but rather a character in the cannabis industry. Some of his recent videos have shown Soil Bae as an elusive Sasquatch-like creature emerging from the woods, while others have acted as reminder to other farmers to make sure they are keeping their plants watered.

What's next for Soil Bae? The latest Soil Bae ChroniCals have followed Soil Bae out of the garden and onto the road as he begins his journey to the Emerald Cup. Viewers can watch Soil Bae face many obstacles on his way, such as finding a ride as a hitchhiker and later getting abducted by aliens. Whaling said that once he gained a following, he wanted to show the character basically going crazy on the hill from the solitude and exhaustion, which can make you wonder if you are losing your mind a bit. Whaling states that he is just happy to be making something positive, "I keep making them because they are funny to me and I like making myself laugh".