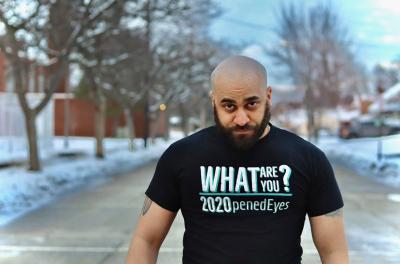 Brandon Wiley's eyes were first opened to his mixed racial identity during the sixth grade at Our Lady of Fatima School in Farrell, Pa. That's when he first heard the question, "What are you?"

The little girl in the hallway genuinely meant no harm, but Wiley says her inquiry triggered "a domino effect." The question "What are you?" would surface again and again, to the point of madness. Sometimes he was called out for acting or dressing or talking "too Black." Other times, he was judged for acting or dressing or talking "too white." He fell into a spiral of depression and anxiety, slipping into suicidal thoughts. "I did not care to be here anymore," he admits.

In the best possible kind of plot twist, the question that nearly ended him would come to empower him. He began to see it not as a question of what one's race is, but what one is made of. The shift in perspective gave rise to OpenedEyes, a 501(c)(3) organization dedicated to educating and training in the areas of self-development, diversity, and inclusion. OpenedEyes promotes (at-times painful) introspection as a path toward greater self-awareness of  problematic attitudes and behaviors, and as a springboard toward uncomfortable but meaningful conversation with perceived "others."

Wiley parlayed temet nosce (Latin for "know thyself") into a career as a licensed professional counselor, partnerships and collaborations with dozens of local businesses and organizations, and a spot in the 2016 class of Erie's 40 Under 40. Among those his nonprofit has worked with are the NWPA Area Labor Federation, Erie County PA, the City of Erie Police, Erie Coalition for a Trauma Informed Community, PA Cyber, Americorps Vista, Farrell and Mercyhurst Prep high schools, and Edinboro, Gannon, Slippery Rock, and Penn State universities.

No matter who OpenedEyes is involved with, it is consistent in its message that the benefits of organizational DE&I (diversity, equity, and inclusion) can only be realized by being consistent. "Don't just talk about it," Wiley offers. "Be about it." Wiley notes that many other DE&I training programs fail because organizations treat them as a box to check rather than an engaged and ongoing process. "Change is hard."

Furthermore, too many approach DE&I from a legalistic standpoint — e.g. "workplace discrimination could result in penalty or termination" — which "breeds resentment and resistance." DE&I should not be treated as a witch hunt for racists or sexists or homophobes — after all, few would readily admit to being any of those things. Instead, the focus should be on "restructuring the way you think" and "behavioral modification." That is, taking constructive actions as opposed to tip-toeing around destructive ones.

DE&I is not a walk through a minefield, it's a coming together at the table. And while at that table, Wiley preaches active listening, a show of sincerity and respect. Too many people listen to respond and not to understand, or cling too stubbornly or pridefully to their own belief systems to allow other viewpoints through. Healthy, actionable dialogue simply cannot happen that way. We must talk with one another, not at one another. This takes time and effort, but there's so much to gain.

Among those things that can be achieved through DE&I are increased employee engagement, organizational confidence, a more attractive magnet for talent, and an improved culture. But it requires the participation and input of all employees, communication, transparency,  commitment — and yes, occasionally stepping out of comfort zones. In order to grow, Wiley advises, "You have to become comfortable with being uncomfortable," learning to embrace diversity not only externally, but internally — both good and bad.

Collectively and individually, we are our own "best friend or worst enemy." In our work, in our lives, and in Erie we must decide "Who are we?"

Story adapted from "OpenedEyes: Diversity Awareness Training," a Zoom presentation of the Erie County Historical Society. OpenedEyes can be found on Facebook at facebook.com/openedeyesnonprofit, on Instagram by its handle @oe_whatru, and on the web at opened-eyes.com