Disease and Distrust in the Allegheny Forest 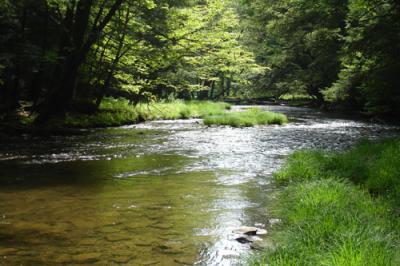 Pennsylvania's Mead Run, a stream located in the Allegheny National Forest, is one of the areas now affected by the Federal Farm Bill.

In late May, with little publicity, 504,000 acres within the Allegheny National Forest, which spans parts of Warren, Forest, Elk, and McKean Counties, was designated as an "insect and disease treatment area" by the USDA Forest Service (USFS). Gov. Tom Corbett successfully petitioned the USFS to do so under a provision in the 2014 federal Farm Bill, giving governors nationwide new authority to make the request.

Section 8204 of the Bill called "Insect And Disease Infestation," which amends the Healthy Forest Restoration Act of 2003, also allows for a streamlined review process, meaning no new or site-specific environmental assessments or impact statements typically required by the National Environmental Protection Act in the areas so designated. It also suspended the public appeal process for projects as they occur in certain instances.

The 8,836-acre Hickory Wilderness Area, located east of Tidioute at the western edge of the forest,  is the only area exempt from this designation in the 513,000-acre forest.

In all, the USFS approved a total of 45.6 million acres of national forest land in 35 states. Each forest restoration project, as it is called in the bill, can consist of up to 3,000 acres, and is eligible for all "treatment," as defined by foresters and the logging industry, such as the use of pesticides and herbicides, as well as tree thinning and timbering

Supporters are hailing the designation as an unprecedented opportunity to expedite projects to control invasive insects, like the Hemlock Wooly Adelgid and Emerald Ash Borer. Others, however, see it as a potential timber grab.

Ryan Talbot, executive director of the Allegheny Defense Project (ADP), a forest advocacy organization claims: "They didn't relax the regulations so they could do the same amount of timbering."

Paul Burroughs, conservation committee chair for Presque Isle Audubon, questions the process by which the designation occurred. "The bill more or less put the cart before the horse, allowing the governors of those states with a national forest to make the designation before any balanced input, making it more or less necessary to review the designation after the fact, a difference from many other projects where input is provided before the decision."

But Andrea Hille, a USFS silviculturist, explains that it made sense to designate the entire forest because of the way tree species co-mingle across the Allegheny Plateau. "Low-density pockets of hemlock and ash occur across the plateau; to address each area in the designation application would have been too difficult." Nadine Pollock, an ecosystem staff officer of the ANF, agrees, adding, "this designation allows the ANF to treat infestations of insects more expeditiously in order to reduce impacts from insects and disease."

Talbot of the ADP requested documents and emails pertaining to the issue through the Freedom of Information Act as the designation process was underway. The emails document the timber industry's involvement in discussions with USFS personnel leading up to the recommendation to Gov. Corbett's office that the entire forest be designated.

Sue Swanson, executive director of the Allegheny Harwood Utilization Group (AHUG), confirms that. "In fact, I was the one who brought this to the attention of the ANF because the designation looked like an opportunity for the ANF to access funds to better maintain the health of the forest. I expect very little timber harvesting as a result of this designation. Honestly, I didn't think this would be controversial."

Peter Wray, conservation chair of the Allegheny Group of the Sierra Club, found it to be just that. He is quoted in a June 14 Pittsburgh Post-Gazette article saying that: "the Forest Service and Corbett administration worked behind closed doors with the timber industry to decide how much of the Allegheny National Forest should be designated as 'insect and disease treatment areas.' The Allegheny is a national forest and Gov. Corbett and the timber industry should not be allowed to drown out the voices of citizens who have an equal right to guide the management of the Allegheny."

Pollock says that little will change despite the streamlined process offered with the designation, saying, "the requirements for the National Environmental Policy Act are not removed by this designation. The designation means a more expedited process may be used for specific projects to address insects and disease where the environmental consequences are well understood and limited in scope. Collaboration and public involvement is still an integral part of this process. We invite any and all members of the public (individuals & interest groups) to participate with us through this process to help arrive at the best possible project proposal."

Conservation groups are distrustful of the USFS's offer of collaboration and transparency. Talbot, citing the fact that the ANF is just 3 percent of Pennsylvania's forests, thinks it is much more important to manage the ANF for clean water and air, habitat for species that depend on mature forests, and public recreation, adding, "today, the Forest Service manages the Allegheny as an industrial tree farm for black cherry and other valuable timber species."

No one, not the conservation groups or loggers, who depend on timber for their livelihood, want to see the Hemlock Wooly Adelgid or logging decimate the ANF. We all want a healthy forest. As everyone learns more about this new designation and projects are proposed and unfold, the transparency — or lack of i t — will become clearer.

Remember, the ANF is the only national forest Pennsylvania has. It is worth fighting for.