How to turn unassuming grains into an intoxicating beverage. 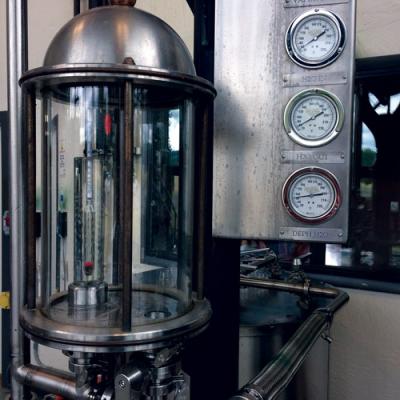 I'm about to let you in on a little secret — and that is how to turn unassuming grains into an intoxicating beverage. Thanks to the good folks at Five & 20 and their Distiller for a Day program, I was able to partake in the distillation process without prosecution. For the demonstration, we opted for a sentimental favorite, rye whiskey. Back in the day, this spirit stoked a major controversy known as the Whiskey Rebellion. All whiskey produced was subject to an excise tax, which the region's farmers did not take kindly to. At its peak in 1794, George Washington himself led an army of 13,000 militiamen into western Pennsylvania to suppress the revolts. The rebels ultimately backed down, but the tax remained difficult to collect, especially since many distillers fled west into Kentucky (the eventual birthplace of bourbon), beyond the federal government's reach at the time. The tax was repealed during Thomas Jefferson's administration.

The federal government in 2017 is probably tracking my mandibular follicle growth rate as I type this (it's common knowledge that all male distillers wear a beard), so it is incumbent on me to tell you not to try this at home.

1) RUN OF THE MILL — Milling is the preliminary bop-it, twist-it, pull-it phase of preparing grain for fermentation. The hammer mill (which essentially pulverizes the grain with tiny hammers) is ideal for distilling, but since Five & 20 is also a brewery, they had to compromise with a roller mill (beer malts only need bullied around a little as opposed to being crushed to a fine powder). The different grains that will be brewed or distilled are proportioned in accordance to a grain bill, with those ratios determining what kind of product it will become. By definition, rye whiskey must be at least 51 percent rye, but Five & 20 prefers a zestier concoction, so theirs is about three-quarters rye. One batch is comprised of over 600 pounds of rye and about 200 pounds of barley.

2) SO YOU THINK YOU CAN MASH? — Mashing is where the party really starts. During this phase, the milled grains take a hot bath (in a mash tun) to convert their starches into sugars. Yeast, the guests of honor, don't have much fun without sugars, so you better make sure you have them or your party is gonna fizzle out quick. Once the mixture is cooled to an agreeable temperature, it's time for the yeast to show up. And believe me, they're ready to get down. They greedily gobble up the sugars and excrete alcohol, humanity's favorite form of poop. However, yeast begin to tap out once they've raised the roof to about 10 percent ABV. That's plenty enough for beer-lovers, but not boozehounds like you.

3) CRANK UP THE HEAT — After mashing, you're left with a porridge-like substance called wash or wort. The goopy, unappetizing slop looks like something that might be served at an orphanage or a boarding school for miscreant children. In brewing, the wort undergoes lautering (rinsing) to separate the liquid from the solids and a boil for sterilization and hopping.

In our case, the fermented liquid goes straight to the still. Distillation is based on the premise that alcohol has a lower boiling point than water (173 degrees Fahrenheit vs. 212 degrees). When the pot at the bottom of the still is heated, alcohol begins to evaporate first and rises, leaving the water behind. That alcohol vapor rises through a vertical chamber and is cooled and condensed back into liquid ethanol.

Depending on the still, that chamber may be subdivided into any number of "climate zones" through the employment of porous plates. Each successive climate zone as the vapor ascends is a little cooler than the last, so condensate will start trickling back down the column (reflux) to be redistilled (this is known as continuous or column distillation). The higher the number of distillations, the higher the alcohol content (up to the 95 percent of a neutral grain spirit, such as Everclear).

4) CUT, CUT, SPLICE — Any distillation run consists of three phases, or cuts — heads (beginning), heart (middle), and tails (end). Most distillers predominantly follow their hearts, as it has the optimal alcohol content without the nasty congeners (volatile compounds that can potentially blind you and/or gelatinize your brain) that turn up in the heads. However, the tails might contain desirable compounds such as esters (oily molecules that enhance mouthfeel) and might be incorporated. The spirit is then diluted down to the desired proof (or ABV x2), then either flavored and bottled or aged.

5) MATURED AUDIENCES ONLY — Ethanol is notorious for stripping the flavors out of whatever it comes in contact with. For our rye whiskey, ethanol teases the flavors out of previously unused charred white oak barrels. Ethanol molecules seep into and out of the woodgrain as the barrels expand and contract with changes in temperature, picking up vastly different characteristics depending on their size and origin (i.e., cooperage). The whiskeys may then be blended to emphasize the best elements of each barrel. If fermentation was Grains Gone Wild, then barrel-aging is a mature art form where composition and body are celebrated.