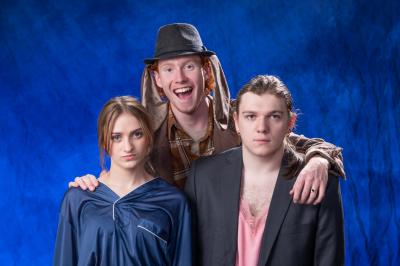 Whether it's out of insecurity, loneliness, or fear, we humans have a tendency to leash ourselves to certain jobs, relationships, or situations — even though they may be categorically wrong for us.

The Sibylle Berg play Dog, Woman, Man examines this phenomenon quite literally, as a nameless woman and man's newly formed bond turns from warmly comforting to unbearably inescapable. Presiding over all of this is a nameless dog who attaches himself to the couple, noting the ironic similarities between their relationship with one another and their relationship with him. The resulting dynamic is simultaneously comic and tragic, and forces us to take a deep look at the very nature of love and relationships.

Such incisive social commentary is a hallmark of Berg's works. The Swiss author, playwright, and activist, is a bit of a rockstar in the German-speaking world, much acclaimed and much translated — with this particular play (Hund, Frau, Mann) translated to English by Neil Blackadder. Berg derived inspiration from the short story "Housebroken" by Yael Hedaya in penning this provocative production, which debuted at the Theater Rampe in Stuttgart in 2001.

If you don't find yourself leashed to any plans or obligations, you might want to consider sitting down for a while.