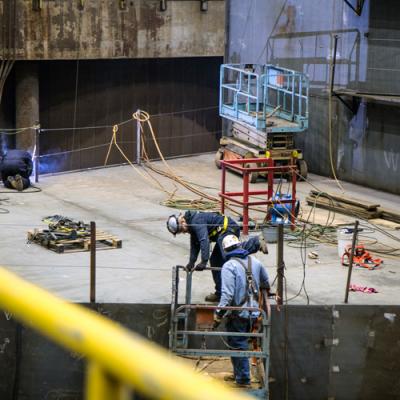 Normally when a man the size of John Witte walks into a room, you'd expect a gruff voice to emanate. He looks more like the offensive line coach for the New York Jets than the owner of an industrial powerhouse. But his New Jersey accent carries gently in almost a whisper across the room as he lays out the short history and bright future of DonJon Marine, Inc., the company his father, J. Arnold Witte, started nearly five decades ago.

The Erie region knows DonJon Shipbuilding primarily for its looming presence on the east bayfront. The 300,000 square foot shipyard is marked most noticeably by its baby blue aluminum industrial hub that would be unassuming if not for the tanker ships in port surrounding the facility.

Commuters drive by each day without giving it much thought. Witte likes it that way.

"We're not good at making headlines," Witte told a group of politicos from the Pennsylvania Department of Community and Economic Development who toured the facility Dec. 16. "We're better at building ships," he quipped.

And it's been that way from the start. One of the company's first projects in Erie, the Articulated Tug Boat Ken Boothe Sr., completed in 2011, was named one of the "Most Significant Boats in 2011" at the International Workboat Show. The boat is a 10,700 horsepower tugboat with a self-unloading cargo system called the Lakes Contender. It's the kind of state-of-the-art construction the firm wants to be known for. 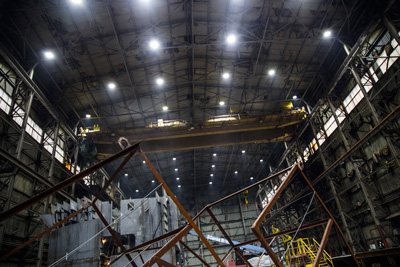 The Wittes saw a future for their company in a market they hadn't yet explored when they toured the Erie shipyard for the first time in 2008.

It's one of just two shipyards on the Great Lakes capable of servicing 1,000-foot ships. The other is Bay Shipping in Sturgeon Bay, Wis.

DonJon believed its investment in Erie would pay off despite the failures of its predecessors like Lake Erie Shipbuilding. In fact, three tenants in 15 years had defaulted on their lease to the Erie-Western Pa. Port Authority.

The family business began as a marine scrapyard. But as Witte tells it, his father wanted more.

J. Arnold Witte, a member of the International Maritime Hall of Fame, graduated second in his class from Villanova Law School and became a maritime attorney in New York. But marine salvage was part of the family legacy which allowed him to provide for his family while building something for himself.

The senior Witte knew there was opportunity for growth. Over the next forty years, DonJon Marine Inc. moved into towing, dredging, and emergency response. Shipbuilding and repairs weren't yet part of the package.

When they took over the company, Witte says, there were only 13 employees they could bring over from Lake Erie Shipbuilding. Nevertheless, by 2010 DonJon employed 120 people.

Today there are approximately 173 employees with the potential to hire as many as 300 depending on the scale and scope of work coming to their docks. Almost everyone who works at DonJon are local full time employees.

Today there are approximately 173 employees with the potential to hire as many as 300 depending on the scale and scope of work coming to their docks. Almost everyone who works at DonJon are local full time employees. But like many manufacturers, Witte says finding enough local people to perform the specialized tasks required of shipyard work forces them to pick up some seasonal labor from shipyards in other parts of the country.

"Right now we have three ships in plus the new construction. That means we need to supplement our current levels with another 50 or 60 subcontractors," says John Nekoloff, subcontracts manager.

Those subcontractors are specialized shipfitters and welders certified to work on marine vessels. It's a workforce they'd like to see grow and be homegrown.

DonJon purchases the majority of its raw materials from local vendors and appears to be committed to the Erie region. It has a long term lease with the Port Authority and it's contracted with the Lake Erie Energy Development Corporation (LEEDCo) to begin a geotechnical investigation of Lake Erie soils. It's part of the process that is expected to lead to offshore wind turbines for energy generation.

Witte knows that, for now, the country remains committed to coal, but if there's something happening on the water he's humbly happy to have a seat at the table and to participate in the conversation.

Beyond that, John Witte is relatively reluctant to shower praise upon the company's successes or prognosticate too much on its future. He'll keep busy looking for the next customer who's going to need a bigger, better boat.