Don't Be Afraid of a Little Spiritual Rez

The infectiously groovy, upbeat rockers are coming back to the Rook 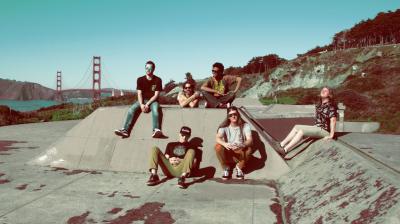 Hailing from Boston, the captivating sound of Spiritual Rez plucks styles from all over. Primarily blending the Jamaican strokes of ska and reggae, they bring together heaping helpings of West Coast rock, jam, and fair touches of metal. But, to borrow the words of another upbeat Bostonian band,."Let's face it." That's the type of recipe that usually leads to eye- regrettable results. There's something special about Spiritual Rez, though. Those lucky enough to catch their headlining set at the 2017 Gathering at Chaffee's can attest to the galvanizing grooves that the band is able to deliver.

This is the first scheduled indoor show at the King's Rook Club since Consider the Source in May. Interrupting the regular patio summer nights, this show is appropriately worthy of attention before the weekly bands take up residence again in mid-September. With widespread talk of a breakup going around last year, accompanied by a touring hiatus, Spiritual Rez set to return in a big way. Taking place at the venue's downstairs concert complex, the palm trees and assorted tiki flair will provide an ideal backdrop for the band's tropical vibe. Vocalist Toft Willingham fronts the band with the laid-back grit of a Long Beach all-star, the inescapable, frenetic spirit of the whole band consuming every corner of the venue. With three full-length albums under their belt, the last being 2016's Setting in the West, fans are able to bookend the band's recorded evolution over the course of a decade, as the titular closing track of their 2006 debut EP was aptly named "Rising in the East."

Opening up the show will be the similarly-toned Pittsburgh quartet, Stationary Pebbles, playing their brand of reggae, funk, and rock. After the show, DJ Jonny Evans (of The LEC) will bring it on, hosting an after-party into the wee hours of the night. — Nick Warren