A rare double-threat, this EP tackles both comedy and music 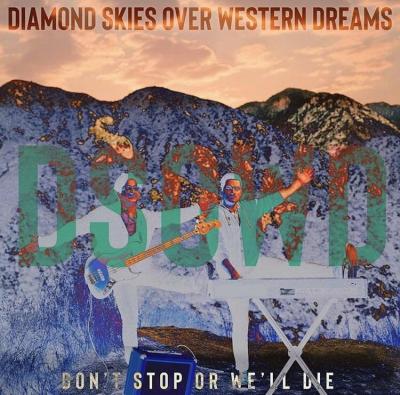 Joke bands are always a gamble when it comes to quality music. Oftentimes, it seems like being funny is the bare minimum you can ask of a joke artist; they're either talented in one way or the other, but rarely both. Enter Don't Stop or We'll Die, the indie-pop rockers comprised of Paul Rust (creator of Netflix's Love), Michael Cassidy (L.A.-based comedian), and Tony Thaxton (drummer of Motion City Soundtrack). The band returned last year with their first full-length in four years, Dazzle Me, and now, with a breezy new EP, it seems they've finally moved onto greener pastures. For the most part, Diamond Skies Over Western Dreams is a smooth and solid affair. The EP'S most nonsensical track ("Downstream") also happens to be it's shortest. We're treated to a silly beach number on the opening track "Cantina," and later, crude characters on "Dusty Dick and the Pinstripe Man." But there are two standouts here that sit among DSOWD's best; the aggressive self-deprecation of Ben Folds Five-esque "Look Around," and the touching re-imagining of the Gracie Films jingle on closing track "Gracie." While not for everyone, Don't Stop or We'll Die still presents themselves as a rare double-threat in Hollywood.