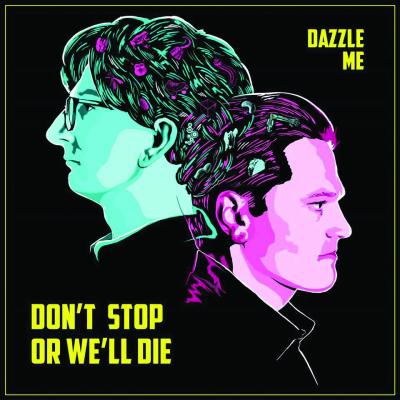 Let's not bury the lede here: Don't Stop or We'll Die should be, and once was, a three-piece. Following the tragic death of drummer and comic genius Harris Wittels in 2015, members (and fellow comedians) Paul Rust and Michael Cassidy took on other projects, including Netflix's Love and the Doughboys podcast. But three years later, Rust and Cassidy return with an album so absurd and catchy, it would make Wittels blush. Put simply: Dazzle Me is quintessential Don't Stop or We'll Die. Even at its silliest, Dazzle Me is jam-packed with hooks, from the fuzzed out synth and bass of opener "Space Worm" and single "Don't Wake the Ghost" to the hilariously innocent sing-along "Taco Night." There are moments when the jokes are so surreal, they become a little dense ("Simon's Cube," "Robotics"), but for every bit that might not land with listeners, there's another that will stay with you from your very first listen ("That's Right I'm Five"). As for the band, well, we're glad they didn't stop when they had every right to, and we hope to have them around for a long time to come. — Aaron Mook