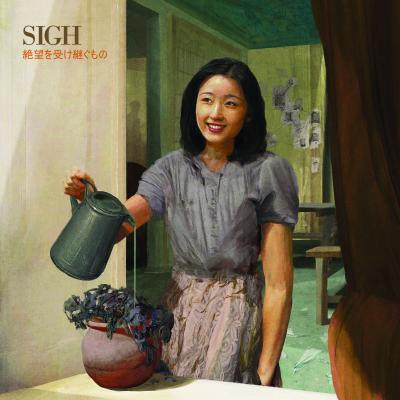 A pulse-pounding nine-tracks, Heir to Despair is the eleventh studio album from the Tokyo metal band Sigh. Starting off with a simple harmonic minor riff, there's a simultaneous blast of distorted guitars, keyboard effects, and sitar sounds. It's an odd timbre, one that almost sounds outdated in 2018, with seemingly incongruous sounds like swirling flutes and chugging riffs intermingling. The driving tempo throughout the album and clear, almost-hummable guitar melodies pave an unrelenting path to the listener's psyche. Mirai Kawashima's vocals vary from crunchy growls to clean shouts, with plenty of chant-like choruses ("Hunters Not Horned"). The band began in 1989 as a black metal act, and have since molded themselves into a progressive powerhouse. It's a wildly frenetic sound that mixes many different elements into a psychedelic metal fever dream, perhaps best exemplified in the final titular track "Heir to Despair." The three part electronic-based suite "Heresy" serves to mark the second half of the album, with a dark, mysterious aura that decays into a flurry of nightmarish samples. — Nick Warren