Down in the Dumps

The loss (and future?) of glass recycling in Erie 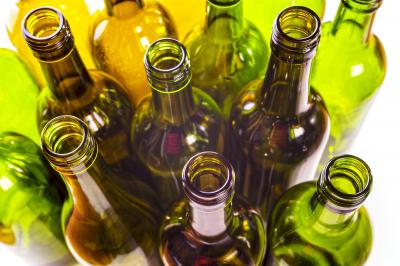 Colin & Linda McKie
Many locals have lamented the discontinuation of glass recycling in Erie County, saving up empty bottles in anticipation of a new solution. While county legislators contemplate the issue, elements within the private sector such as local startup Bayfront Glass, LLC have hosted pop-up glass drop-off events.

It has been over ten months since most municipalities in Erie County halted the curbside collection of glass recyclables. We've all felt that searing sense of guilt when we throw our beer or wine bottles into the trash instead of the recycling bin, but we're learning to cope — maybe we've stashed our used glass bottles away until an alternative means of disposal was presented (like Mazza Vineyards did) or maybe we switched to exclusively drinking boxed wine (hopefully not).

But at a time when Erie is experiencing record-high lake water levels and increasingly intense winter storms as a direct result of climate change, we should be acknowledging these natural omens and increasing the reduction, reuse, and recycling of our waste, cutting our greenhouse gas emissions, and beginning the shift toward a more sustainable and circular economic model, not lugging our most valuable recyclable material to the landfill. The need to find a new means of economically recycling glass before the public's muscle memory is reprogrammed to think that "glass is trash" has led to many recent developments across our region and state, with each attempting to reintroduce the process of recycling glass in some way.

It's important to remember how we got here: as Mary Birdsong outlines in a past Erie Reader article, titled "Local Recycling: Sorting Things Out," the elimination of glass recycling in Erie was largely the result of China increasing its restrictions on the quality of recyclable materials that it purchases from other nations, as well as glass contamination at the household level.

In short, because we don't often properly rinse out our glass containers and have grown accustomed to the consumer-convenience of the single-stream recycling system in the United States (meaning that we mix all of our plastics and glass and paper together in a single "stream" during collection and sort the materials later), our glass often contains food remnants or breaks during collection, contaminating the whole batch of recyclables and forcing recyclers to dump about 60 percent of the glass that they collect into landfills. So recyclers' profit margins are being squeezed from the demand-side (China) and from the supply-side (poor quality and low quantity of collected materials), leaving many recycling firms around the nation to cut out the weakest, and heaviest, link: glass.

This is what happened in Erie County when Waste Management decided that it could no longer reasonably accept glass in curbside recycling. Advanced Disposal continues to recycle the glass that it collects from Millcreek and is able to do so by delivering its recyclables to a materials recovery facility (MRF) in Buffalo, N.Y. Per New York law, glass is not permitted to be discarded in a landfill and thus, the glass that is brought to the Buffalo MRF is recycled into road aggregate.

Erie County government has been working to unearth a solution to both the loss of glass recycling and the lack of viable recycling options in the rural portions of our County. Brittany Prischak, the former environmental sustainability coordinator for the Erie County Department of Planning and the current sustainability manager for Allegheny County, mentions that Erie County sent out a request for proposal in April in search of a firm to conduct a study that identifies gaps in recycling services for the county's rural residents and suggests ways in which to improve and fund local recycling processes. This study will then be used to craft a five-year strategic plan to assist the county government in bolstering waste collection and recycling efforts, policies, and programming. Nestor Resources was recently hired to conduct this study.

Meanwhile, in the private sector, the Erie-based startup company, Bayfront Glass, LLC, is hosting pop-up glass drop-off events around Erie County. Residents can drop their glass recyclables off at one of the pop-up locations and Bayfront Glass will crush the containers and sell them to CAP Glass, a glass manufacturer in Mount Pleasant, Pa. These pop-ups occur every Saturday from 9 a.m. - 2 p.m., with one at Baker's Field (E. 32 St. and Holland) on Oct. 26, and the Whole Foods Co-op on Nov. 2, and the Green Township Municipal Building on Nov. 9.

10/26/2019 from 9 AM to 2 PM
Millcreek Municipal , 3608 W 26th St, Erie, PA 16506
Bayfront Glass organizes pop-up collection events in partnership with a host municipality, non-profit, social or church group, or business where residents can drop off their clean container glass. ...

One hurdle that Bayfront Glass faces is reaching its critical mass of operations. Though the new firm purchased a manually-fed glass crusher, it hopes to invest in the full line of equipment necessary to establish a glass processing facility, thereby allowing it to process more glass at a faster pace. Unfortunately, to make that investment, Bayfront Glass needs to collect consistent and greater volumes of glass bottles and containers. Mazza Vineyards gave them a kickstart by offering up their (literal) tons of glass bottles that the winemaker was saving so as to not dump them into the landfill.

Check out Bayfront Glass at bayfrontglass.com for more information and the locations of future drop-off events.

Equally exciting is the recent proposal in the Pennsylvania House of Representatives for the implementation of a bottle bill (HB 1322; part of the "Zero Waste PA" initiative by Pennsylvania Democrats), sponsored by Representative Wendy Ullman (D-Doylestown). It is expected that Senator Sharif Street (D-Philadelphia) will introduce a similar bill in the Pennsylvania Senate in the near future. According to BottleBill.org, bottle bills — more formally referred to as "container deposit laws" — require a minimum refundable deposit on various beverage containers to incentivize high recycling rates for those containers.

When a retailer buys beverages from a distributor, the retailer pays a deposit (say, five cents) for each of the bottles purchased, upon which, the cost of that deposit is passed on to the customer (you and me). After we pay for the drink, plus the extra five-cent deposit, and drink the Vanilla Coke, we take the bottle back to the retailer, a redemption center, or a reverse vending machine and are refunded our five cents. The retailer then turns around and recoups the five-cent deposit from the distributor.

The deposit system has been proven to work and our neighbors in New York have had a five-cent container deposit in place since 1983. In 2017, the State boasted a 65 percent bottle redemption rate (versus Maryland's 25 percent container recycling rate without a bottle bill). The Pennsylvania bill would also enact a five-cent deposit, but it is yet unclear of the level of political support for the current proposal in Harrisburg, though a similar bill was introduced in 2009 (SB 588) and died shortly thereafter.

The failure of SB 588 and the yet-unknown standing of HB 1322 is an unfortunate, but frequently told story. Environmental solutions across all sectors of society are presented, discussed, and often tabled by leadership due to the long-term nature and distant pay-offs of the necessary investments. But therein lies an inherent and false assumption that the sole responsibility of attaining a higher level of sustainability and eco-friendliness sits purely in the hands of leadership. As has been exhibited in recent years across the world, leadership can fail and when it does, it's up to us as individuals to carry the world forward. If so, history teaches that, eventually, leadership will follow and that the power does indeed lie in the people's hands.

And us people living in the Great Lakes region have a greater responsibility to ensure that our environment and societal processes are as healthy and eco-friendly as possible to protect this region's world-renowned natural resources for the future — it's the price we pay for the collective ability to economically leverage our lakes to the tune of a $6 trillion regional GDP.

Reversing climate change may take a generation of international cooperation, but protecting the Great Lakes watershed takes only the joint action of eight U.S. states, Ontario, and the included population. Making the additional effort to solve and support solutions to our glass recycling dilemma is one minuscule — but necessary — step toward fulfilling our duty as citizens of the Great Lakes region and ensuring that we are on the path toward creating a planet that (at the very least) isn't worse off today than it was yesterday.

For an in-depth analysis of the loss of glass recycling in Erie County and across the nation, keep a lookout for Seth Trott's upcoming Jefferson Educational Society report, "Down in the Dumps: An All-Inclusive Look at the Issue of Glass Recycling in Erie County, PA." He can be reached at sethtrott@gmail.com