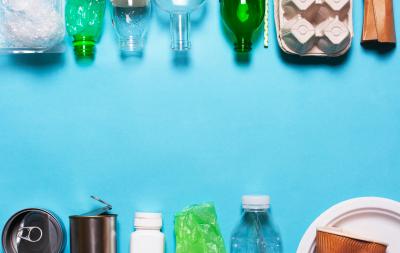 We're four months into new recycling rules and if you are thinking about this at all, you may have found yourself standing over your blue bin wondering if the plastic container you're holding belongs in there or not.

Or maybe you're not wondering. The guidelines at the Erie County website suggest that many people practice "wishful recycling," which means putting something into the collection system hoping it is recyclable, without actually knowing if it is acceptable or not.

This phenomenon is what may have caused some problems in China, where loads of contaminated and unusable items were rejected and discarded. For years, China accepted our plastics in large quantities because, for them, it was cheaper to reuse the waste as a raw material rather than attempting to find virgin polymers that are chiefly derived from natural gas, oil, and coal.

In 2013 China stepped up its enforcement of its "Green Fence," at ports nationwide by turning away any shipment of mixed scrap plastic that was determined to be more than 1.5 percent contaminated by non-reusable scrap. Last year, China upped its restrictions by ceasing imports of certain recyclables, including mixed paper—magazines, office paper, junk mail—and most plastics, causing waste management companies around the country to see the market for their recovered commodity nearly vanish.

So, if you are a wishful recycler you may want to rethink that. Unacceptable items in the recycling stream interrupt the sorting process, making it more time-consuming and costly, plus it contributes to a more contaminated final product making it more difficult to market as a new commodity. This matters to citizens because the more costly the process, the higher our fees may be.

So, as they say on the Erie County website, "When in Doubt, Throw it Out."

Let's try to eliminate some of that doubt, shall we?

One of the more confusing aspects of the new changes to recycling is what plastic items are and are not accepted.

Can we use the recycling numbers as a guide anymore? According to Brittany Prischak, Erie County's sustainability coordinator, no, not really. "The purpose of the numbers was never really clear from the get-go, and now it really doesn't add anything to the recycling conversation in my opinion. I do know that some educational material might note that 1 and 2 plastics are still accepted."

To simplify instructions for Erie residents, the city recycling guide refers to these plastics, a bit vaguely, as bottles, jugs, and jars. Examples of these would be liquid laundry detergent containers, pop, juice and water bottles, and food containers like plastic peanut butter jars.

But there are caveats. Peelman says that even if a container meets the criteria (having a top with threads for a screw cap), but the item does not have any number on it, it can't be recycled.

So, numbers DO matter in some cases. And an important note: If you want to recycle the plastic lid that accompanies your acceptable container, it must be on that container — not loose in the bin or bag.

But there is bad news for all the other plastics you may bring into your home. Any cups or tubs (even if they have recycling number 1 or 2 on the bottom) cannot go in the bag or bin. See the chart on page 13 for a detailed accounting of different kinds of plastic containers and their acceptability.

The most surprising and unfortunate change in the systems of many regional municipalities is glass no longer being recyclable. The market for used glass is narrow, and oftentimes single-stream pick up systems produce "contaminated" loads, where one type of unusable glass, like a window pane, gets mixed in with others and reduces the viability for reuse. It is also heavy and breaks easily. Broken glass in a mixed recycling stream causes havoc if it sticks to other materials like plastic or paper, thus contaminating those processing systems as well.

It is especially upsetting because, according to Peelman, glass is the most durable material for recycling (along with aluminum). "Glass bottles and jars may be melted down and recycled into new glass bottles and jars an unlimited number of times. In comparison, a plastic bottle may only be recycled one to maybe three times before the item that it is made into is thrown into the trash," she explains.

And while citizens are dismayed about the change, regional recycling coordinators may be even more irritated. Peelman tells me, "Those who administer these programs are just as upset about it as the citizens, if not more so. It is extra frustrating for us because it is our job to help our community to be able to recycle and right now there is no way to recycle glass."

The only municipality still accepting glass is Millcreek (residential customers only). Their five-year contract, signed in 2017, is with Advanced Disposal that sends its recycling to Buffalo Recycling Enterprises which still accepts glass for resale as road aggregate (coarse to medium-grained particulate material used in construction). Commercial disposal accounts in Millcreek (businesses, apartments and mobile home parks) that are not Advanced Disposal clients cannot recycle glass, however.

Beyond that, regional coordinators have not given up on glass. A committee comprised of representatives of the Erie County Department of Planning and Community Development and other stakeholders has met several times. All four regional universities are on board in various capacities. The Erie County planning department and students at Edinboro teamed up to create and publish a survey about our willingness to recycle. The survey closed to responses on April 15.

In an effort to help the community learn about the issues and potential solutions in regard to glass recycling in the region, a forum will be held on Wednesday, April 24th at the Hirt Auditorium at the Blasco Memorial Library at 5:30 p.m. Along with an introduction by Prischak from Erie County, student groups from Edinboro and Gannon Universities who have been doing research into various aspects of glass use will be presenting what they've learned about potential model programs.

Many of us may not able to recycle glass, but what about their associated parts, like metal lids?  Believe it or not, those are recyclable (in Millcreek they must be larger than two inches). One small victory.

And fear not, all who are hoarding glass in the basement or garage in hopes of finding a place to recycle it, Peelman promises "We want our community to be able to recycle glass and that is why we are not giving up and are diligently working to find a solution."

There were also a few minor changes in paper recycling. In the City of Erie, if you want to recycle shredded paper, it must be in a clear or blue bag separate from any other materials. And If you want to recycle envelopes, they must not have glassine windows in them (or you can cut them out).

These little things are a burden to many people, who quite frankly don't care that much. Americans are terrible at recycling anyway, as so many people just want their refuse gone when they put in on the curb or in the dumpster.

According to experts in the industry, this is not a sustainable practice now that so much consumer packaging can no longer be recovered and reused.

And, of course, this comes at a time when American consumers are creating more waste than ever. According to the most recent statistics from 2015, America generated 262.4 million tons of waste, which is 4.5 percent more than in 2010 and 60 percent more than was created in 1985.

So, many of those in the sustainability field are adding a new "R" to the old "reduce, reuse, and recycle" alliteration. The addition is "refuse." This means thinking about what you purchase how long its life will be, and how it will be disposed of at the end of its usefulness. Many single-use items are already on the chopping block. Plastic retail bags have been banned in California and Hawaii, and New York just passed legislation banning them starting in 2020. Other states have enacted an alternative to an outright ban by requiring any retail establishment that wishedsto use plastic bags to have a convenient storefront receptacle to collect bags and a system for recycling.

Many other communities and states are weighing similar types of legislation. In addition, the distribution of many single-use plastic items such as straws, cutlery and carryout containers are facing new rules that prevent their use entirely or attach a fee.

But many argue you can't place the entire onus on the consumer. Manufacturing companies don't bear any of the costs of disposal, so they have no incentive to make products out of material that will be easier to recycle.

Experts agree, though, that the initiative has to come from both sides. Consumers need to be smarter about the purchase choices (do we all really want more stuff?), and companies have to find ways to reduce the use of plastics in their production streams.

Until then, experts suggest that people educate themselves about the rules for recycling in their community and comply, even if it hurts. But also look for ways to eliminate consuming non-recyclable items in the first place. 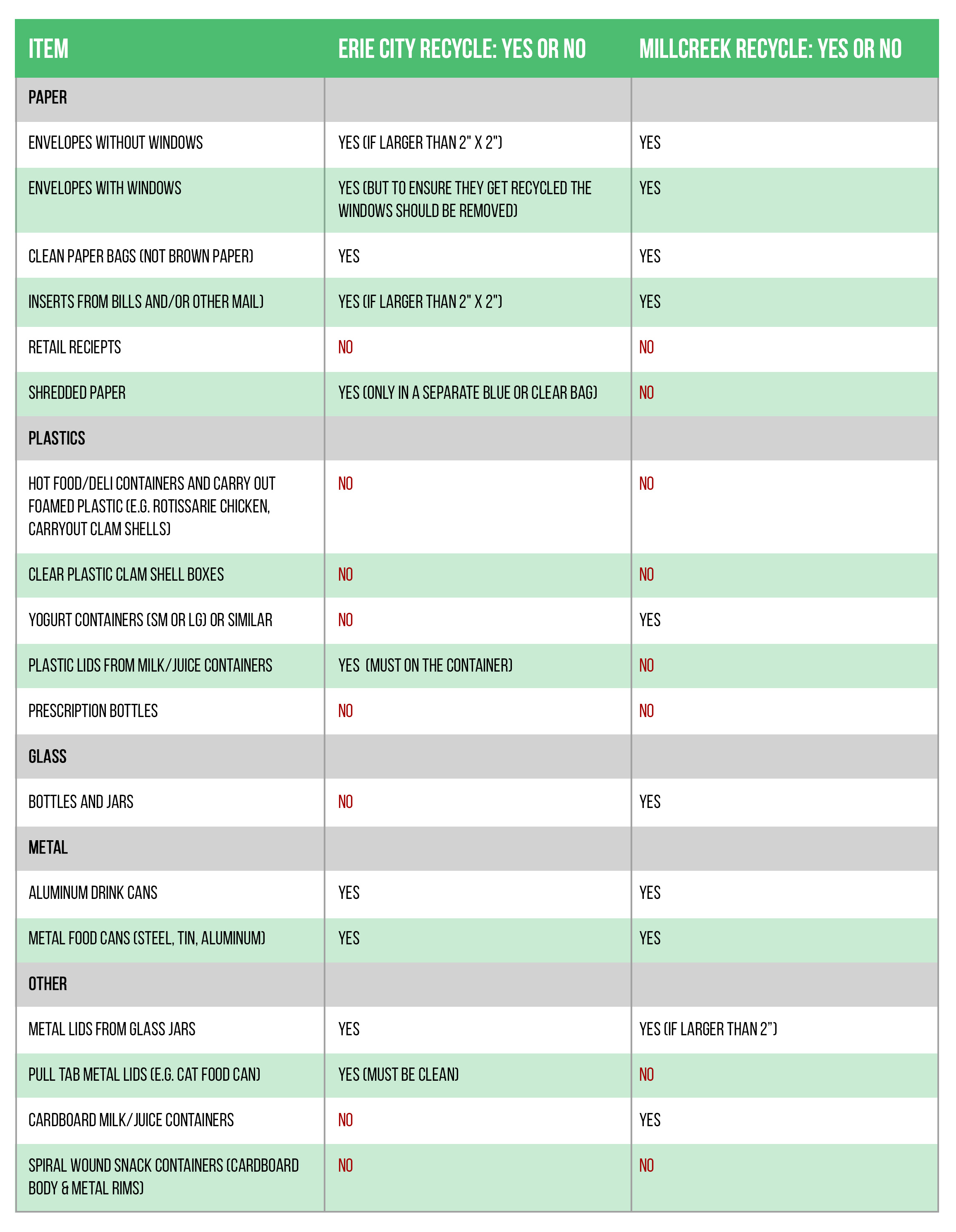 Here is a list of which company handles refuse and recycling pickup for municipalities around Erie County. For more information or to ask questions, contact your municipality or refuse company.

For Curbside Recycling of Top 10 in the Bin items:

Municipalities with Single Stream Curbside Recycling for All Residents