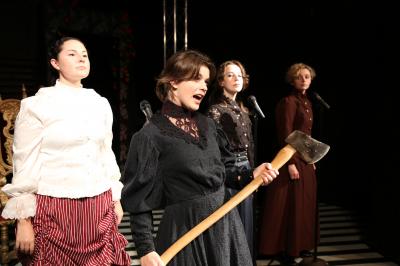 Nicole Lossie
Tori Lyn Koszegi, Jenna Baker, Anna McJunkin, and Hadleigh Jae Bills star in Lizzie at Dramashop. This quartet features a blend of both the AXE and ROSE casts, each performing on different dates.

Erie's Dramashop presents a new musical titled Lizzie this September. Based on the book by Tim Maner, Lizzie is a dramatic musical focusing on strong themes such as murder, sexual abuse, and oppression. Premiering at the Living Theater in New York City in 2009, Lizzie is a hard-edged, punk rock take on the legendary Lizzie Borden axe murders.

"In the late summer of 1892, Lizzie Borden was accused of murdering her father and stepmother with an axe," Dramashop's online synopsis reads.  Through unreliable testimonies and incomplete evidence, Borden was acquitted. The music — composed by Steven Cheslik-deMeyer, and Alan Stevens Hewitt, with lyrics by Cheslik-deMeyer and Maner — seeks to delve "into the mysterious mind of Lizzie Borden and speculates on the motivations she may have had." These motivations include the loss of inheritance, a history of sexual abuse, mental health issues, and more. In the musical, Borden is joined by her older sister Emma, her maid Bridget, and neighbor Alice, the four women creating a punk rock score illustrating Borden's story, who "took an axe and gave her mother 40 whacks, and why when she saw what she had done, gave her father 41."

Dramashop is set to have a season-opening celebration on Friday, Sept. 23, with a 7 p.m. reception and an 8 p.m. performance by the AXE Cast.