Dropkick Murphys, Clutch, and Hatebreed Ship Up to Erie 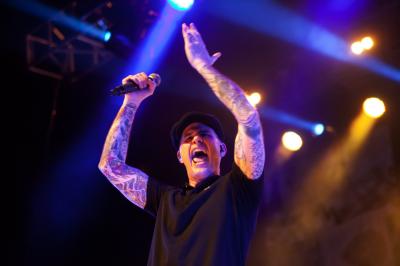 Jeff Meade
The Dropkick Murphys' Al Barr will rile up the Erie Insurance Arena as his brand brings their raucous brand of Celtic punk to town on September 21.

The Erie Insurance Arena has hosted many amazing concerts in its time, and the Dropkick Murphys with special guests Clutch and Hatebreed should be no exception — just a little bit louder.

If you have at least one percent of Irish heritage or have simply gone to a bar on St. Patrick's Day, you have probably heard a Dropkick Murphys song. For the uninitiated: just imagine a few Irish sailors who happened to put on a punk show after a long, hard day at the docks. Most recognized by their song "I'm Shipping Up To Boston" (featured prominently in the film The Departed), the band has been getting people on their feet to yell and chant since forming in 1996. Just a year after that, they dropped into Erie in support of fellow Beantown compatriots The Mighty Mighty Bosstones, prior to releasing their debut album Do or Die. Their latest album, 11 Short Stories of Pain & Glory, debuted in January 2017 at No. 8 on the Billboard Top 200, with many songs dealing with the subject of opiate addiction. Now decades in, the band is demonstrating once again why they're one of the most notable acts in the Celtic punk rock scene. A longtime pro-union advocate, the band have close ties to the AFL-CIO, and have vocally lambasted politicians like Wisconsin Governor Scott Walker for using their music, saying "we literally hate you !!! Love, Dropkick Murphys."

Along with the Dropkick Murphys comes Clutch, a band that — if I were to describe as a drink — would most likely be a straight shot of American bourbon. Heavily influenced by blues and Southern rock, Maryland natives Clutch have been entertaining audiences all over the world since the four members met in high school. With their 12th album, Book of Bad Decisions, Clutch exhibits that they still know how to blend the old sounds of blues music into their hard rock mentality, giving their audiences a familiar classic American sound with a stoner rock flair that leaves listeners wanting more.

The two bands have also added Hatebreed as a special guest on their 2019 fall tour. Hatebreed first formed in 1994 and since then has transformed the metalcore music scene by mixing punk rock and heavy metal. Not only have they been an influential force in the hardcore scene, but they have also been nominated for two Grammys along the way. Hatebreed's latest album, The Concrete Confessional (2016), reveals that even after two decades together, the band is still a significant force in music with their hard-hitting, fast-paced style.

To say the least, this eclectic concert has a little bit for anyone out there with an alternative edge, so if you want to be entertained by not one amazing and influential hard-rocking band, but three (not to mention opening act Amigo the Devil), this night is not one to be missed. — Patrick Winney