The Kyoto ensemble returns to Mercyhurst 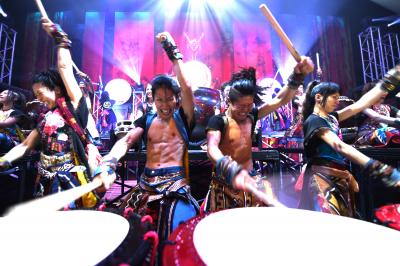 Before Tokyo was the capital of Japan, Kyoto was its heart. But even before that, Nara reigned as the ancient capital, dating back to 710 C.E. Japanese culture is said to have blossomed there. At the end of the Yamato plains, in the Askura Village, is where the journey of the Yamato drummers began — a group committed to preserving and respecting the Taiko tradition of drumming.

As a group, Yamato traces its roots back to 1993 in the Nara Prefecture, but has since grown into a world-class musical experience, thrashing and pounding on 40 Taiko drums, ranging in size from 22 pounds to over half a ton.

Celebrating its 26th season, Yamato is bringing its Jhonetsu (Passion) Tour to Mercyhurst University after a seven-year absence.

"The mission of the Mercyhurst Institute for Arts & Culture is to strengthen the vibrancy of the Erie region by presenting world-class performing arts experiences (such as Yamato) that lift the spirit, galvanize the intellect, stimulate the imagination, and encourage the free exchange of ideas," said Brett Johnson, artistic director

The performance is an immersion into Japanese culture as the musician-athletes move their bodies to strike the drums, believing the drumbeat, much like a heartbeat, is the pulse that keeps the Japanese spirit alive.

While the troupe still lives within the village, and engages in daily strength training in addition to rehearsals, they infuse their own ideas into their performances. Unlike Taiko's long-standing patriarchy, Yamato has always allowed women into the group, and breaks from the stereotypical stoicism associated with Taiko drumming.

Especially in their newest tour, Yamato strives to provide an exhilarating experience with a fervor that drives the heartbeats of those listening to the ground-shaking beats and watching the dynamic choreography.

The feverish frenzy of originality and intense innovation speaks to the passion that inspires so many people in the arts.

"By making our programs available and accessible to the broadest possible audience, the Institute strives to create an environment of richly varied, inclusive cultural experiences," Johnson concluded.