Eighty years after Black Sunday, we still haven't learned the lessons of the Dust Bowl. 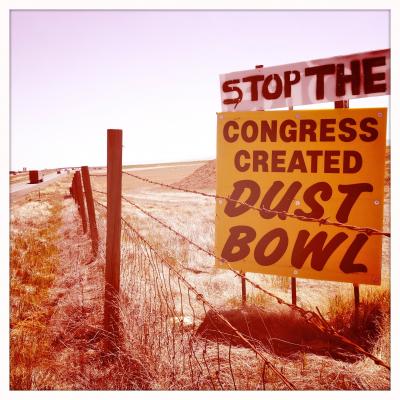 Sunday, April 14, 1935, dawned unusually calm and bright in the region which would soon be known as the Dust Bowl: southeast Colorado, southwest Kansas, and the Oklahoma and Texas panhandles. By that afternoon, however, precise geography proved meaningless.

According to Wessels Living History Farm, "During the same April ... one of [President Franklin Delano Roosevelt's] advisors, Hugh Hammond Bennett, was in Washington D.C. on his way to testify before Congress about the need for soil conservation legislation. A dust storm arrived in Washington all the way from the Great Plains. As a dusty gloom spread over the nation's capital and blotted out the sun, Bennett explained, 'This, gentlemen, is what I have been talking about.' Congress passed the Soil Conservation Act that same year."

Congress, characteristically, had been dragging its feet. Changing course meant acknowledging the failure of the federal government's homestead acts, which encouraged rapid, unsustainable agricultural settlement of the plains. It meant, ultimately, that FDR's administration had to recognize that goverment policy largely caused the Dust Bowl, a striking turnaround explored compellingly in Timothy Egan's The Worst Hard Time.

"It was the combination of drought and misuse of the land that led to the incredible devastation of the Dust Bowl years," explains PBS's American Experience. "Originally covered with grasses that held the fine soil in place, the land of the southern plains was plowed by settlers who brought their farming techniques with them when they homesteaded the area. Wheat crops, in high demand during World War I, exhausted the topsoil. Overgrazing by cattle and sheep herds stripped the western plains of their cover. When the drought hit, the land just blew away in the wind."

Will it take another Black Sunday to convince policy makers to support sustainable agriculture? Will it take empty shelves where almonds used to be, to convince we-the-people to care about how and where our food is produced?