Dwarfism Awareness Month Through My Perspective 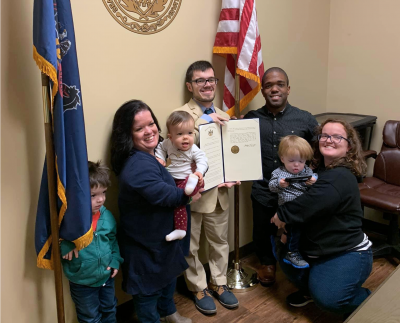 October is known for multiple different awarenesses. What quite a few people do not know is that October is also Dwarfism Awareness Month. This is a time of year that holds true and close to my heart as a person with a form of dwarfism known as hypochondroplasia, who also lives here in Erie, PA. This month to me is a chance to educate, spread awareness, change perspectives, and remind all of my friends, family, and neighbors what Dr. Suess quotes best "A person is a person no matter how small."

October is known as Dwarfism Awareness Month because October 25th is the birthday of actor Billy Barty. Barty is also the founder of the largest organization for dwarfism on earth known as Little People of America (or as we call it, the LPA.) Little People of America was founded back in 1957. Barty had an idea that he wanted to share with his friends who also had forms of dwarfism. He called together a group for a weekend in Reno, Nevada where they would hang out, discuss ideas, be seen as regular friends and not as little people, and just enjoy each other's company. Thus, the birth of the LPA.

To this day, Little People of America has over 8,000 members and supports people with dwarfism all over the nation. The LPA holds a national conference (pre-COVID) each year in a select location where just like Barty, people with dwarfism can hang out, reunite friendships, find support such as medical and educational, dine together, have some good laughs, and overall just be themselves. The LPA is also broken up into different chapters and regions. For example, Pennsylvania is part of District 2 which also includes the states of New York and New Jersey.

To celebrate this historic and wonderful resource, some little people including myself celebrate what is known as Dwarfism Awareness Month. For the whole month of October, you will find on my Facebook page thirty days' worth of facts, quotes, stories, views, and more. For me, this month started during my final semester of college. My senior thesis was on the topic of Dwarfism in the Media and the ways a little person is portrayed in the media such as a comedic movie or reality television show. This can impact the way the viewer understands dwarfism. You would be surprised by the number of people who get their source of information from media aspects, not just news sources, but as mentioned reality shows or comedic movies.

People with dwarfism have also faced a negative view in the media, one that has caused stereotypes or misinformation. For example, this past year a little boy with dwarfism was being severely bullied to the point where his mother showed him on camera asking her for a knife for a sad purpose. It only took an online rumor that this boy was an 18-year-old scammer for the world to lose sympathy and credibility. This shows sadly how little some people can know about little people.

As a little person here in Erie I too have seen the ramifications of the media portraying dwarfism. When you walk down the street and an individual drives by and shouts a profanity at you telling you to go back to munchkin land, you sometimes ask what you did to deserve that? Many people with dwarfism including myself just want to go about their day without the unnecessary attention or harassment. Why label me as a midget, a term that was made infamous by P.T. Barnum, which makes me feel as if you are saying "step right up!" Just like you, we are human beings, maybe just a foot or two smaller. We are not mythical creatures, stunt objects, jesters, or sporting equipment (look up dwarf tossing and see for yourself that something that harmful and gruesome exists.)

In 2019, a popular country band was playing at a popular venue in Massachusetts. During this concert, the band decided to add in what they considered comedy and hired a little person to wrestle an average height person on stage. One factor you might want to consider in this situation is that the venue employed another little person. That person was later interviewed and described the walk home as "a walk for his life." To many, this may seem like a meaningless situation but add in factors such as alcohol consumption rates at concerts or even the popularity of the band. All it takes is one intoxicated individual to yell "MIDGET!" and then it's downhill from there. This action upset me so much that it motivated me to work with Representative Ryan Bizzarro to get HR 497 passed last year which declares October as Dwarfism Awareness Month here in Pennsylvania.

I want to take this month to share with my city let alone my country that in the words of Matt and Amy Roloff from Little People Big World, "we can do anything anyone else can, just in a different way." Little people are just like you, we eat, drink, sleep, breathe, and live normal lives. The only true differences are really height and certain adaptations in certain areas such as work or home life. I ask my city to please join me in celebrating Dwarfism Awareness Month and please be considerate towards people with dwarfism.

Nick Sorensen is a motivational speaker, stand-up comedian, and dwarfism advocate. He is the host of the regular streaming podcast, BUDDYCAST.