House Republicans are suing the President. Where's Edgar Snyder when you need him? 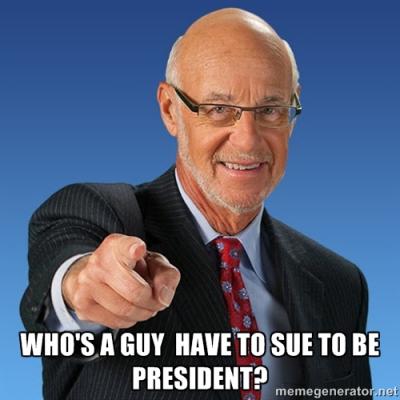 Edgar Snyder is now a front runner for 2016, whether he runs as a Republican or Democrat.

That's because Congress has now fully embraced the deregulated legal system that has permeated the nation for the past two decades and he may be the only candidate that can wrangle the feral cats that have overrun Capitol Hill.

In the wake of President Obama's announcement Thursday night that he would use executive action to offer temporary legal status to millions of undocumented immigrants, House Republicans initiated a lawsuit against the President.

Here's the thing: House Republicans filed a lawsuit over provisions of the Affordable Care Act, not the President's immigration policy.

If you're wondering what the Treasury has to do with all of this, remember that the U.S. Supreme Court declared the Affordable Care Act constitutional in 2012 as a function of Congress's ability to levy taxes on the American people.

It's a clear last ditch effort of the 113th Congress to stonewall the President until the Republican led 114th Congress comes to Washington in January to pass, essentially, the same immigration legislation and probably not all that radical of reforms to the Affordable Care Act.

By the time members of the 114th Congress take their seat and begin to gear up for 2016, the Affordable Care Act may be too big to fail.

Remember Michael Steele's comments a few weeks ago that "the Affordable Care Act will not be repealed...Waiting until 2017...there's going to be close to 25 million people inside the system. [Republican's] are going to run on taking away [voter's] healthcare?"

This lawsuit, more distraction than discourse, is the last ditch effort of a do-nothing Congress to tarnish the legacy of a President, who in the long view of history will be likely be seen as a controversial pragmatist rather than a polemic ideologue.

President Obama's move on immigration was a political maneuver to force some action before the end of the 113th Congress.

"That's not the way our system was designed to work," House Speaker John Boehner said in announcing the lawsuit.

But Congress operates on rules designed to allow lawmakers to deal with executive policy which it doesn't approve of. The Congress, however, has rejected the rules in favor of a public relations courtroom drama. We can safely assume that was also not part of the founders' plan.