In its tenth year, the free Festival kicks off the summer in the Erie region. 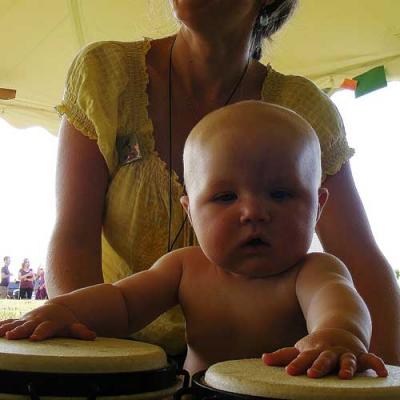 Every year, upon the third weekend of May, raining or shining or whatever, summer's always dropped in – all informal-like, in a free-and-easy, three-day stretch – and art and music, rooted and rich and colorful and cool, abound in nearby Edinboro.

And this weekend, lucky for you and lucky for me, is no different.

Like it always has, the Downtown Edinboro Art and Music Festival – a good one, to be sure, deep-steeped and well-simmered in the fine, long-storied lines of Appalachian music and folk traditions – will, for its 10th year, happily usher in the summer music season in and around our getting-greener region.

Now, I've been here and there for most of the Downtown Edinboro Art and Music fests over the course of that decade – sunny Edinboro's where I call home, you know. And one of the coolest things, I've found, is that no matter where you go (and it's a pretty good-and-sizable gathering, one that may attract some thousands over that three-day stretch), it feels small and intimate, unhurried and always of-the-heart.

That could be, at least partly, because it's the kind of festival where everything – tons of live music, open workshops, and a whole lot more – is happening all over the place, all the time, making for happenings galore within the happening at-large.

The fest kicks off with its traditional opening jam by organizers/hosts/pickers Fred Parker and Friends, and following headliner performance by longtime area jam mainstays Donna the Buffalo (considered by many to be masters, and among the first in the herd, of the modern roots-rock-groove revolution) Thursday night at Culbertson Hills.

And, from there, for a good few days, it just sorta doesn't stop.

Along with local favorites like Eric Brewer & Friends, Potwhole, Claire Stuczynski, and Tiger Maple String Band, and regional and national acts like Blue Sky Mission Club, Big Daddy Zydeco, Jim Avett, and Driftwood, there are dozens of bands and performers – and lots of worthwhile music, arts, and crafts workshop presenters, too – doing their things at different venues and locales, indoors and out, in and all around downtown Edinboro.

And it's all free.

That's right – free. A real good time that, beside whatever you may wanna spend once you're there, doesn't have to cost you a dime.

It's really close by, and genuinely family-friendly, too, so, if other, unrelated plans for your weekend aren't already pre-set in motion, there's really no reason not to go check it out.

Those who make the Downtown Edinboro Art and Music Festival happen every year – a dozens-strong, all-volunteer core of folks from all throughout the Edinboro community (businesspeople, artists, musicians, townies, students, and others) certainly agree most heartily. Recently, as they worked to bring all the festival's finishing touches together, I took some time to talk all about it with Fred Parker, local musician (he leads the festival's host band, Tiger Maple), gallery owner, and one of the festival's chief organizers.

Ryan Smith: Hey, Fred. So, we should start off by talking a little about 2014 being the Downtown Art and Music Festival's 10th year. Does it feel like you all have been at this for a full decade now?

Fred Parker: Not really – well, sometime it does, and sometimes it doesn't! It's definitely a milestone. It shows we have some momentum, and some sustainability. [But overall], it doesn't feel like it's been 10 years.

RS: Tell people who may not be too familiar a little about what the Edinboro Downtown Music Festival is all about.

FP: For me, it's like the kick-off for whole festival season in the area as we know it. It's the first one that really gets that ball rolling.

RS: Agreed, man. So, has it gotten easier to work out the logistics of presenting the festival as an all-free, all-inclusive event each year, or do you always face the same sets of challenges from an organizational perspective?

FP: It does get a little bit easier. We wouldn't begin to be able to do this without the help of our many, many volunteers [about 50-plus in total]. It's a lot of people making a lot of things happen.

RS: Well, you're all doing some fine work, Fred. That said, tell me about the philosophy behind the Downtown Art and Music Festival. What's it about, and why do you think so many people find supporting it, as a free-and-open event year after year, to be so worthwhile?

FP: The original intent of the whole festival was to create something free and open to the whole population – whoever that might be. Everyone is welcome.

We're giving something to the community that people desperately need in their lives – music, and art. [Both are] such critical things we need to have in our lives.

RS: Very true. So, then, tell those who've never been before just a bit about what they may expect to encounter – besides lots of great music and great art – at the festival.

FP: You're gonna run into a lotta good people, all there for the same reason – to celebrate music, art and hangin' out with each other.

The whole thing's just about having a good time, and generating a feeling of community. That can enrich our town, our society ... I dunno, maybe even our world.

And there you have it, folks.

Steeped in Appalachian-roots traditions and celebrating a decade of ushering in the summer festival season by welcoming great performers, artists, and an array of workshops – all free and open – right into Erie's own backyard, the Edinboro Art and Music Festival is Thursday, May 15 through Sunday, May 18 on multiple stages and various venues, both indoor and out, in the beautiful 'Boro.

For the full lineup, directions to performance/exhibit venues and other locales in and about town, and plenty of other details about this year's festival, visit edinboroartandmusic.com.

And we'll see you somewhere there.