Fassbender may have his face plastered on magazines, but in *Frank, he shows off his acting skills while trapped inside a head made of plaster in Lenny Abrahamson's 2014 movie flick.

by Alex Bieler
View ProfileFacebookTwitterInstagramGoogle+RSS Feed
September 3, 2014 at 6:10 AM 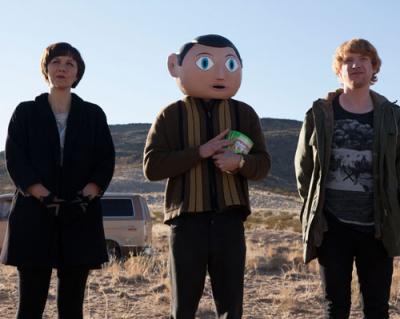 Over the past five years, Michael Fassbender has made an impression in the movie industry through performances in films such as 12 Years a Slave, X-Men: First Class, and Inglorious Basterds. Fassbender may have his face plastered on magazines, but in Frank, he shows off his acting skills while trapped inside a head made of plaster in Lenny Abrahamson's 2014 flick.

While some actors have long makeup sessions or do weight training to fully become their characters, Fassbender wore a large, fake head to take on the role of Frank, an avant-garde musician who hides his own face away behind an unblinking, smiling manufactured face. *Frank, which will be shown as part of the Edinboro Film Series Thursday, Sept. 11, centers on Fassbender's enigmatic character and his band after the addition of a new member, which leads to intriguing opportunities for the eccentric group with comical results.

For just $5, you can head to the Pogue Student Center at Edinboro University to see a critically-acclaimed new film with one of the best actors in recent years, regardless of the face he wears. – Alex Bieler