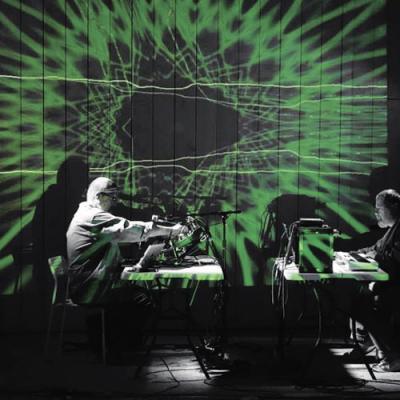 Adam Holquist, the creative voice behind onewayness, has been booking and promoting shows for his Electroflux series for almost five years now. The latest of these shows will feature dRachEmUsiK alongside D.Miñoza, greyscape and Modular Moose at the Erie Movie House. But Holquist's series has come a long way since its 2012 origins.

"It started kind of for two reasons: I wanted to be able to host shows to help out friends who were touring, and I also wanted more of a local outlet for my own playing," says Holquist. "I had just started playing live with my solo project onewayness, and at the time, I wasn't getting a whole lot of invites to play locally."

At a certain point, Holquist made the decision to promote the series more publicly, posting about it among online communities focused on experimental music, touring bands and the DIY community. Eventually, Electroflux became the locally recognizable name it is now.

"It's a great venue for what we do because it's a nice, intimate, good-sounding room and we've also got the full capabilities of their projection system at our disposal, so it makes for a nice immersive experience. "

"It's become a lot less focused on me playing," says Holquist. "I still play a lot of the shows with one project or another, but it's a way smaller proportion than it used to be. And it's been good to step back and leave more of those slots for other local artists."

The series once spanned a number of venues before Holquist began making arrangements with Movie House owners Craig Stadler and Nicole Boivin, who had hosted Holquist's Celluloid Liberation Orchestra before — a project that aims to provide original scores to classic silent films in a live setting.

"It's a great venue for what we do because it's a nice, intimate, good-sounding room and we've also got the full capabilities of their projection system at our disposal," says Holquist. "So it makes for a nice immersive experience. "

What makes the Electroflux series — and this event in particular — a "must see show" is the truly experimental nature of performances, not just as a genre tag but in the variety among performers, from the droning guitar work of D.Miñoza to the fresh synthetic sounds of Modular Moose. If an Electroflux show is anything, it's a guaranteed local performance unlike any experienced in Erie before. — Aaron Mook