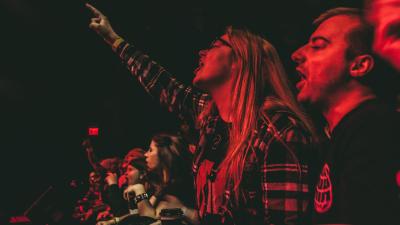 With the recently announced second coming of emo gods My Chemical Romance, now is the perfect time to join The Emo Band on stage to sing your favorite sad songs at the Emo Night Bar Crawl Karaoke, presented by the Andromeda Agency.

The Emo Band, from Pittsburgh, have been a regional staple in the growing "Emo Night" trend that's taken the bar scene by storm in the past few years, as those who lived through the music's peak popularity are approaching their 30s and trying to hold on to their youth. The Emo Band's website has a full list of pop-punk and emo covers from the '90s and '00s from the likes of Blink 182, Good Charlotte, Green Day, Hawthorne Heights, Taking Back Sunday — and of course, My Chemical Romance — among many more. The band also lists "You!" as the lead vocalist, so those interested in singing on stage are encouraged to arrive early to sign up.

The bar crawl will begin at Plymouth at 9 p.m., head over to Bigbar at 10 p.m., and then conclude at Resolution Nightclub, where The Emo Band (and you), will perform. And don't forget to dig out your hair straightener, eyeliner, Converse shoes, and your tightest pair of pants for an emo-themed costume contest. — Tommy Shannon