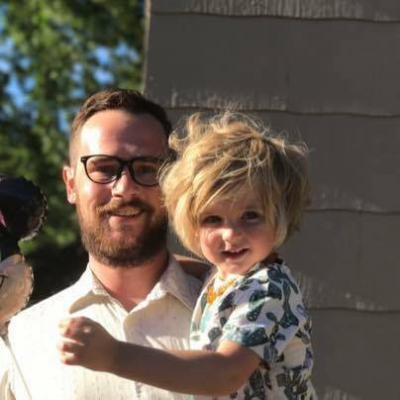 When my oldest son was born, the miracle Of life became apparent for me before I even saw him. The nurse, the doctor, my wife, and I all instructing, encouraging, shouting – and then, suddenly: a new voice in the room. A new voice in the world. Dash's first cries made my knees buckle and my head swim.

Three years later, my knees would give way to again hear that voice, or his brother's, put two words together.

I wasn't always set on having children, because, looking back, I was afraid of the commitment of fatherhood and introducing my children to an often cruel and unrelenting world. Even then, I didn't realize my family would struggle against the core of what our society values. It's now clear that my wife and I are all that stands between my boys and a civilization that doesn't want them and is monstrously indifferent to their needs.

Our worries started around the time Dash turned one. He wasn't speaking at all, wasn't holding eye contact, and wasn't responding to his name. My wife, a trained family therapist, identified these as possible signs of Autism Spectrum Disorder (ASD). Our family doctor told us to wait and see if it gets better. Thus began our introduction to a system that often cares more about reducing expenditures and paperwork than giving children the best possible outcomes. We have since changed providers.

One of the most insidious aspects of the disorder is that it's behavioral: There's no blood test, no way to be sure, or rule it out, because the cause is unknown. So, we were on a cloud of unknowing, which led to doubt.

One of the most insidious aspects of the disorder is that it's behavioral: There's no blood test, no way to be sure, or rule it out, because the cause is unknown. So, we were on a cloud of unknowing, which led to doubt. Were we just overreacting? New-parents' jitters? Was this some mild Munchausens? It's an incredible weight to bear: not knowing what's wrong with your child, how far they can progress – whether they will even know that you love them, or be able to tell you that they love you back.

And there's no way to know if your concerns are unfounded. Most react with hollow optimism: "hopefully he'll grow out of it and start talking soon." What other words can one offer? To this day I find myself hoping that people won't casually ask me about my kids, because every time I don't say "I'm absolutely terrified about their future," I'm lying so we can both go about our day.

We didn't see improvements, so we aggressively pursued all available avenues for resources. A diagnosis of ASD is generally unheard of until around at least age two, but every bit of quality, sourced information we could find indicates that the best possible outcomes result from the earliest therapies and treatments. The clock was ticking.

Finally, we began to schedule therapies for play/social interactions and speech therapy. Improvements began almost immediately. Whereas before Dash would pick toys up and drop them on a hard surface, he began to bring them to us. He began to become fascinated by books, and then began to seek attention from us: praise, instruction, help, and – most crucially – affection.

Soon after he was signing "more," and he began to respond to his name. He began communicating. He would not be alone. He would know our love.

But Dash has a long way to go. Children his age have vocabularies 10 times what he has. And as we approach his third birthday, he transitions out of the Early Intervention program and into the Intermediate. The difference between these two is the source of funding: Early Intervention is covered by the Department of Welfare and the Intermediate Program is funded through the Department of Education. This means treatment is at the whim of politics, and his care will compete with interests like for-profit charter schools, starved public schools, and the almighty taxpayer.

The research is clear: The best outcomes are derived from intensive Applied Behavioral Therapy, 35-40 hours a week before age five. We have been told that the Intermediate program covers 2.5 hours of preschool a week with 15 other students.

And the clock is still ticking. And Dash's brother, Devereaux, approaching his second birthday, no longer says "dada" and exhibits signs of sensory issues. 'Reaux's behavior has already warranted an official diagnosis of ASD.

My boys' therapists deserve unending gratitude. Like most of us, they are underpaid, overworked, and underappreciated, and these folks give their best to the children they serve. Dash's performance exceeds some of my greatest fears, as he'll greet me warmly when I come home, and he'll give me hugs or ask me "up?" I live for these words.

Some argue my kids are only entitled only to what I can provide for them, and I should be grateful that anything exists at all. I am not the only parent or community member with skin in the game. Many others face tough choices, and bleaker outcomes, with consequences even more dire than what my children face.

Moreover, many parents don't have the bandwidth to aggressively fight for the resources their kids need. Worse still, some are denied access because of their zip code or income. Even with our challenges, I have to acknowledge that my family has many privileges.

We are all told to pick ourselves up by our bootstraps. I should come up with $50,000 dollars annually for a dedicated behavioral therapist for each of my children. If we can't afford it, it's our failure, as parents (as are parents of one in 68 kids).

Despite the cynical absurdity of this claim, and despite how hard my wife and I struggle to provide for them, I hang my head with guilt every day. The dominant narrative says those with every advantage and luxury should sacrifice as little as possible, before those with disadvantage have what they need. If you disagree, note the health care bill passed by Congress cuts $800 billion for highest income earners, and denies health care to 24 million people.

If something catastrophic happened to me today, my family would be in ruins, and, on a long enough timeline, something catastrophic will definitely happen to me. Could my wife work with two children with special needs? How could she get the health care coverage they need? How could I work if something happened to my wife? What would happen to my boys without both of us championing their cause?

The answers bring me only terror. It's a terror in every parent's heart, but for my family, it's likely never to go away.

Why do we allow ourselves to live in terror? We have the resources in this country for all of our schools to be palaces, to provide for the needs of our most vulnerable, and we choose not to: Why? So Scott Wagner and Betsy DeVos and Donald Trump might add a shred of value to their immense wealth? We are not in a time of scarcity; we are in a time of scarcity for the many, and unprecedented wealth for the few.

Every public figure talks about how much they care about children, but looking at actual policy, it's clear that keeping taxes down is far more important than providing the resources my children need. Or Erie's schools. Or for eldercare. Or for the differently-abled. Or Meals on Wheels. Or job training. Or a community college. Or for community centers in untapped communities.

While I deeply appreciate all of the volunteer work, the organizations building visibility and contributing to research, charity is just not enough. I understand the need to run, walk, raise money for ASD research and support, but that pales in comparison to what is needed: a nationally-funded mandate to provide children with ASD the full range of necessary therapies for the best possible outcomes.

To do that, we need to build the power to stand up to those vested in the current state of things: those who believe people and democracy support money and markets, not the other way around. Make no mistake, that's our value system, and that's who's leading us right now. Our power is derived from the organization of people, who see their self interest is tied directly to the value we have for all.

Because I am terrified of what will happen to my kids when I die, I am building power for the equity and wellbeing of all. If I fail, when I depart this earth, my children will be relegated to stations of the unwanted and unworthy. Many already find themselves in those stations, and I am working for a society that provides and protects people for who they are. Only together can we provide the means for each of us to reach our full capacity as human beings, including my sons. That's why I'm organizing hundreds of people locally and working with thousands across Pennsylvania. We are building a movement for each other and ourselves. Enough words, it's time to get to work for a society that puts people first.

Daniel Doubet was recently named statewide executive director of Keystone Progress. He can be reached at dan@keystoneprogress.org.