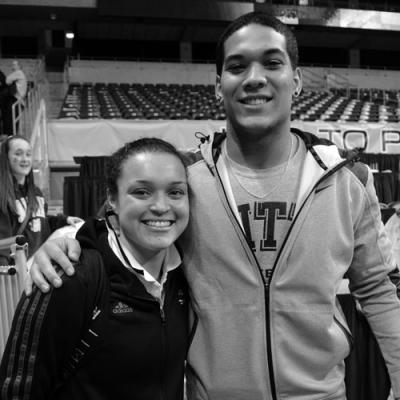 In our last edition of ER Sports, we were talking about McDowell grad James Conner and how proud he made all of Erie when he led the University of Pittsburgh to a 30-27 Little Caesar's Pizza Bowl win over Bowling Green, with the ex-Trojan picking up MVP honors in the process while wowing the entire country with his performance.

Now it's Villa Maria Academy alum Kayla McBride carrying the Erie banner, as she is garnering national recognition while starting for the University of Notre Dame, the undefeated and No. 2-ranked team in the country.

McBride, an All-American candidate for the Fighting Irish, had a chance to perform in front of hundreds of local fans who made the short trek to Pittsburgh to witness the senior star when she sparked ND to an impressive 109-66 win over the University of Pittsburgh. The local product dominated for the winners from start to finish, the ex-Villa standout scoring the first basket of the game just seven seconds into the contest.

The VMA grad gave her many fans in attendance a real show as she scored 20 points, dished out four assists, and grabbed four rebounds. She did all this while sitting out the final 12 minutes in the rout of the Panthers.

A tribute to her popularity was the fact the ND coaching staff held up the team following the contest so the popular McBride could finish signing autographs for the hundreds of fans who waited to see her. And she stayed around and signed every last piece of paper.

For the season, McBride, who was just named to the Team USA Training Camp list – one of just 33 players in the whole country to be named to the prestigious list – is averaging over 16 points per game this season. By the way, being on the watch list means the Erie product is a possible Olympic team member.

For her career, the ND star has scored nearly 1,500 points and could end up as one the top-five scorers in Fighting Irish history.

Noted sports photographer Mike Gallagher, who witnessed the slaughter in the Steel City, said, "Kayla is not only one of the classiest athletes I have ever covered, she is one of the best female hoopsters in the country. " High praise coming from a journalist who has seen – and covered – the best in the world in his storied career.

One a personal note, I have to echo Gallagher's sentiments, since I have dealt with her many times as our radio station covered Villa Maria when she was busy leading them to a couple state champs. She always had time for us and did everything with class and dignity.

A special Erie Reader congratulations to Nate Tewell, who represented the Erie area with a national championship performance, the Northwestern High School sophomore winning the NFL's Punt, Pass, and Kick competition held in Colorado. He captured top honors in the 14-15-year-old division

He finished more than 50 points better than the runner-up from Jamestown, North Dakota.

Tewell, who is currently playing hoops for the Wildcats, was one of the champs honored at the recent Broncos-Chargers playoff game Sunday, Jan. 12.

Hello - I just wanted to drop you a quick line and thank you for your nice article about my son James in the Erie Reader...he, as am I, are truly humbled and appreciative of the overwhelming support from our home town!  I listen to you on my drive in to work in the mornings and truly enjoy your show! Thanks again, Kelly Bibbs