Roger Goodell and the NFL's fumbling of the Ray Rice incident, the continuing saga of the Brian Schulz firing, and the start of high school football camps. 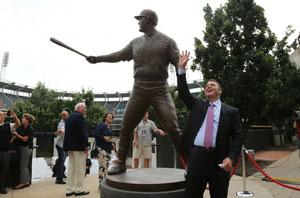 ONE OF THE best things about having attention deficit is the fact that many, many things interest you, and a lot of those interesting things can happen at the same time. This is how I feel once August arrives and the excitement starts building for the beginning of all the football seasons — high school, college, NFL — as I actually believe I become a different, more understanding, more patient person.

For example, as I was writing this opening paragraph, two people banged on my door and wanted to talk about the Bible, and I politely told them I was busy. I see this as a major step forward, as I hate being bothered in my own home by strangers, particularly people wanting to sell me something I don't want, people wanting to talk religion, or politicians wanting to talk anything – this really irritates me.

If this door-knocking had taken place in, let's say May, I probably would've been rude (I know this is sad), but it is what it is.

And "is" means I'm not happy when people intrude on my space. However, this a story for another time and another place, the timing being totally correct for a scattering of different sports' subjects.

The first category can be classified as "Are You Kidding Me?"

Arrogance is a trait I find incredibly disgusting, especially from someone who should be showing some humility and understanding. In this case, NFL Commissioner Roger Goodell rushes to the head of the class as one of the all-time pompous morons. His comments defending the handling of the Ray Rice situation is almost beyond belief.

In most cases, knocking someone out while on an elevator is a criminal charge, and it's usually compounded when it's on tape and the person punched in the head is a female. While some people would think major discipline is going to be involved in this type of situation, apparently the NFL – and Saint Roger – beg to differ. After reviewing the tape, the one where Rice is shown dragging his wife-to-be out the elevator like a sack of potatoes, the NFL decided a two-game suspension is the appropriate response to this act.

That's correct: the League handed this out to Rice for his part in this disgusting act. But it only gets better when Goodell chimes in with his insane explanation.

Despite the fact the Ravens running back received a standing ovation from the team's fans at summer camp, this wasn't the worst thing I witnessed. I perceive this as beyond horrific as Goodell commented, "We've dealt with this in a serious manner, and we're very confident that this young man understands where he is and what he needs to do going forward.

"I think what's important here is Ray has taken responsibility for this; he's been accountable for his actions. He recognizes he has made a horrible mistake that is unacceptable by his standards, by our standards. And he's got to work to re-establish himself."

Do you think the fact that the whole world saw him pulling his unconscious then-fiancé off the elevator means he could do anything BUT take responsibility or holding himself accountable for his actions. Geez! What a genius. I would've never thought of this myself.

Goodell isn't the only master of the obvious as Rice acknowledged he has to live with this the rest of his life. No kidding? I thought this was an excusable offense.

The Commissioner also explained that this was Rice's first offense so this helped lessen the penalty. So keep this in mind. If you're going to murder someone, make sure you don't have any pervious charges pending – otherwise you'll be in big trouble.

INTERESTING ITEM No. 2 pertains to the situation regarding the boys basketball program at General McLane High School, the status of Coach Brian Schulz after the GM School Board did not renew his contract after it was recommended they do so by a committee.

There are some questions I would like to ask the board just to ease my mind. And I believe these certainly are reasonable ponderings and are for the entire group.

1. Why did you have a committee make a recommendation if you weren't going to accept the outcome?

2. Have you disbanded athletic committees after pretty much rendering them moot?

3. How many basketball games have you attended?

4. How many practices have you observed?

5. You had to be prepared for a large outcry of support for Brian Schulz. What did you do to prepare for this public relations nightmare?

6. Were you aware how unfair this has been to the young people in the program?

7. Were you prepared to resign if it appeared you made a colossal mistake?

8. Why did you wait until June to make this decision?

9. Why has it taken so long to get a basketball coach?

10. Do you consider this an embarrassment to the teachers, students, and athletes in the General McLane School District?

WITH HIGH SCHOOL FOOTBALL CAMPS opening soon, there will be plenty of stories to look at, especially in these four programs: New head coaches at Harbor Creek, Iroquois, and McDowell, plus two new coordinators at Cathedral Prep. It's definitely going to be a lot of fun in the area this season.

HARBOR CREEK – There will most certainly be a new look on the Huskies' sideline as long-time coach Dan Budziszewski will no longer be calling the plays after heading up HC for 32 seasons.

Replacing him will be Ned Bailey, who was in the McDowell program for over 25 years; this is his first time as a head coach of a varsity squad. His ninth-grade Trojan teams were powerhouses, and he will try and install the power-running attack and strong defense that his Millcreek teams featured.

The Huskies haven't had a lot of success the past few seasons, but word is this Orange and Black roster has plenty of good athletes and Bailey may be taking over a sleeping giant.

Morgan took over an MPS program that had won just two games in two years before he arrived, and he molded the Lakers into one of the top Class-A powers in the area, combining a potent winged-t offense with a stout defense. The Hurst rushing attack put up some staggering numbers under his tutelage.

Numbers were a bit of a problem at Mercyhurst, though, and this could prove to be true at Iroquois also, but the new Braves' boss did a great job with getting players to come out at MPS, and he will field a very fundamentally sound team at the Big I when his program is established.

McDOWELL – Brad Orlando, who was Offensive Coordinator at rival Cathedral Prep, will take over for Mark Soboleski, the Trojans converting to a wide-open spread offensive squad from a powerful running attack. Watching this evolve will be an exciting view for high school football fans in the area.

Orlando's Ramblers were among the most explosive teams in the nation, his last two quarterbacks Damion Terry (Michigan State) and Billy Fessler (Penn State) putting up staggering statistics that had them rated amongst the best in the country.

Adding to the interest is the fact former Prep defensive coordinator Matt Mele will also be making the switch to Millcreek from West 10 Street.

CATHEDRAL PREP – Head Coach Mike Mischler, one of the most successful coaches in Erie history and the owner of two state championship rings, has to replace two strong coordinators, Brad Orlando on offense and Matt Mele on the defensive side of the ball.

It will be tough to find people to step in for these two, but Mischler didn't have to look far for offense, as he will be the OC, and the DC will be highly-regarded Mike Krahe, a standout defensive player at Prep and Mercyhurst University, as well a top college coach at Lake Erie.

The Ramblers' mentor always favored a strong running game, but look for his squad to continue to air it out while implementing a powerful rushing attack.

Red Land threatened to win the game in the final inning as they had the bases loaded with two outs and their best hitter up. However, a line-drive out to right field enabled the Nationals to bring home the crown.