It's time for midterm grades and the Erie Reader Super Seven. 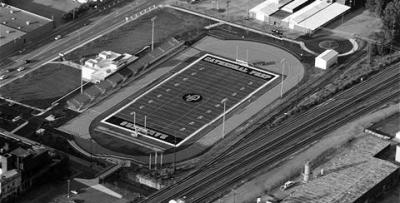 IT'S HARD TO believe the high football season is already half done, gridiron fans enjoying the action so far – especially the surprising Central Tech Falcons. However, it's not that shocking to the Erie Reader fans, as they were clued in ahead of time as CT was featured prominently in this publication before the season even began.

With Coach Rob Matz entering his fourth season as boss of the Falcons, it appeared his program was taking hold, and that certainly turned out to be true as the Falcons roared to a 5-0 mark without even being tested. And CT did it the old-fashioned way, running the single-wing offense while everyone else was turning to pro sets and spread formations.

Matz has done wonders, and the future is bright with solid freshman and junior varsity programs.

Relying heavily on the running game, the Falcons have been nearly unstoppable as they have pounded Warren, General McLane, Strong Vincent, Meadville, and Bradford. As a matter of fact, the 64-28 blasting of Bradford showed the depth that is also being developed when Eddie Leggett was needed to step in at running back because of injuries and did a "fair" job.

All the junior speedster did was rush 21 times for 329 yards and six touchdowns, ending with 40 points for the evening when he added a pair of two-point conversions.

For the seasons, the Falcons get an A grade, and the only reason they didn't get an A-plus is I don't give that out – although I was semi-tempted here.

I'm giving CP a B grade, as expectations are always high at the West 10th Street school, the lack of a solid passing attack keeping Prep from an A. However, with a strong defense and potential for a very good passing game, an A is a distinct possibility.

Another school acing the first half is Girard, the Yellow Jackets of Coach Jim Funk showing great balance with a potent offense and a strong defense. The "O" is led by junior RB Kel Barnes, one of the more explosive runners in the area.

Again, the jackets get a solid A so far.

Gannon University was expected to be good in the pre-season, but the Golden Knights have exceeded expectations, dispensing of Southern Connecticut State, Cheyney, Kutztown, and Clarion to open the season. The Golden Knights are an extremely physical group on both sides of the ball.

GU has an extremely rough schedule the remaining of the way, but the Knights will be tough for any of their opponents to grab a win.

There's no doubt GU deserves an A, so far.

Meanwhile, both Mercyhurst and Edinboro are still looking to pull it together, as the two schools have yet to post a victory. To their defense, both programs opened with murderous schedules and will face tough tests down the stretch. However, the Lakers and Fighting Scots must be given a D grade.

After a month of the NFL season, each the Bills, Steelers, and Browns have had ups and downs.

The ups for Buffalo includes a 2-0 start, the ups for the Browns a win over the Saints and couple of heart-breaking losses to the Steelers and Ravens, while the Steelers' up is an impressive win over Carolina and the downs – and they are ugly downs – are the second half of the Browns' game and an ugly loss to the Ravens. However, the ugliest of them all was a last-second loss to the Tampa Bay Buccaneers, the Bucs winless at the time and regarded as the worst team in the NFL.

The Bills and Browns receive a grade of C-plus, because expectations weren't very high to begin with, and the Steelers check in with a C-minus, as people tend to expect more out of the Black and Gold.