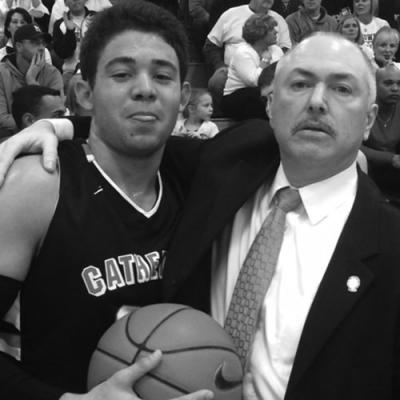 Where do I start?

Erie has to be one of the greatest towns for a sports fan, as there is definitely something for everyone, and there is so much happening that really I don't know where to start.

But it doesn't matter – you can't go wrong.

So, I have opted to begin with the recent Erie Sports Banquet held at the Convention Center, and it happened to the be the 50th annual brought to us by the legendary Artie Arkelian. It's hard for me to believe that I was just getting my driver's license when AA held the initial event.

Who could've imagined it would sustain for half a century? Only Arkelian could pull this off – especially nowadays, as the athletes demand such high appearance figures, but many still show up because of the respect he has throughout the country.

This year's event was held at the Bayfront Convention Center, and it was the perfect setting for the extravaganza that featured five Hall of Famers, several more outstanding pro athletes, and a few local high school stars.

As large as the Convention Center is, it was almost too small to accommodate all the class exuded by the featured guests who took time to sign a slew of autographs as well as talk sports with the fans. It would be impossible to name all the stars and what they did, but I did have a chance to interview – and chat – with many of them.

Of course, the main attraction was the Tech great Fred Biletnikoff, who was back for the second consecutive year, and Biletnikoff's charity was the recipient of the proceeds from the great affair. He has a sincere love for his hometown, and again, took time off from his busy schedule to visit Central Tech and talk to some of the current football players.

I sat with former Pittsburgh Steeler Dwayne Woodruff and his wife for dinner, and he is one of the most impressive athletes I've met in a long time. He is a judge in Pittsburgh now, and he and his wife Joy talked to every young person that asked for an autograph, giving each and everyone a quick lecture on how important school is.

Dwayne and Joy are both graduates of Louisville University.

I did my Sports Blitz show from the lobby preceding the affair and the likes of former Steeler Robin Cole and ex-Browns top dog Hanford Dixon could not have been nicer.

There's no doubt: Out of five stars, the 50th annual Erie Sports Banquet was a six-star event.

ONE OF the biggest surprises – and more impressive teams – this season is the Edinboro University Lady Scots basketball squad, with the charges of Coach Stan Swank putting them in a strong position to win the PSAC West and host the conference championship. The Boro has really impressed with a pair of wins over rival – and nationally ranked – Gannon.

In the latest meeting between the two powerhouses, EUP led 37-21 at the half and grabbed a 12-point decision. And this was on the Lady Knights' home court.

ANOTHER MAJOR surprise team has to be the Erie Otters, as the local icers are a flat-out powerhouse in the OHL, and the team is drawing huge numbers for their games. This is great news as it seems like just yesterday the owners were talking about selling the team, and there was a strong possibility that it could've been to an out-of-town group.

That would've been a disaster.

Also, the Erie fans had a chance to see history recently when Dan Fox broke the single-season record for goals by an Otter player.

CATHEDRAL PREP has had numerous outstanding performances by basketball players over the years, but I'm not sure any Rambler has carried a team like senior Matty Harris has done of late.  He has had several games that border on incredible, as he has helped his team to a Region crown while giving CP plenty of momentum entering the playoffs.

In a recent two-game period, he tallied a total of 78 points, 38 in an OT win over Central Tech followed by a 40-point performance in another OT game against a good Canadian squad.

I believe his two-game tally of 78 points is a local record. The only player, I believe, that could've come close to that was Strong Vincent great Essie Hollis.

THE THIRD ANNUAL Erie Area Coaches Clinic is slated for Saturday, March 8 at the Avalon Hotel. The clinic will feature over 10 hours of football instruction from the most successful college and high school mentors in the area.

As the playoffs are upon us, it's time for the top teams to put up or shut up. I am looking for these squads to put up.

1. (Last Week 1) HICKORY – The Hornets are a powerhouse, but it will be interesting to see how they hold up against the best in post-seasons play.

2. (2) VILLA MARIA – If there's a team peaking at the right time, it's the Victors. VMA is just steamrolling opponents and could go far in the playoffs.

3. (7) - GENERAL McLANE – The Lancers made a huge leap to the No. 3 spot and appear poised to be a tough out in the post-season.

4. (5) KENNEDY CATHOLIC – KC plays in one of the smaller classifications, but the Sharon-area school will be a force.

5. (6) CONNEAUT – This team could be one of the major surprises in the playoffs.

6. (NR) GIRARD – The Yellow Jackets are another team peaking at the perfect time, and Girard faithful take their hoops seriously.

7. (3) MERCYHURST PREP – The Lakers are hitting the post-season on a bit of a slide, but they usually respond well under playoff pressure.

1.  (2) CATHEDRAL PREP – The Ramblers made some believers by sweeping McDowell in the regular season, and Division I recruit Matty Harris has put together some legendary performances. He has been nearly phenomenal in some clutch situations in several close games.

2. (1) McDOWELL – The Trojans have compiled a glossy record, but they have to prove they can beat rival Prep, with the Ramblers winning 11 straight in the series.

3. (3) FAIRVIEW – The Tigers are playing great ball and will be hitting the playoff trail with a full head of steam.

4. (5) EAST – Coach Matt Jones has his Warriors playing great, too, and they are as athletic as any team around.

5. (4) FARRELL – Another team with incredible athletes; it will take a good squad to stop the Steelers.

6. (NR) OIL CITY – Let's give the Oilers some respect, as they have quietly put together a solid team with some veteran players.

7. (NR) – Cochranton  –  The Cardinals are another team flying under the radar, but we will see how they compete in the playoffs.

Over 50 teams from the United States and Canada participated in the 20th Annual Sarah Backstrom Hockey Tournament hosted in Erie by the Erie Lady Lions. The Cazenovia Lady Chiefs earned the U19 title, and the Acanzster Avlanche capturing the U16 crown.

The Lady Chiefs edged the Chicago Falcons for their title and the Avalanche sneaked by the Kensington Valley Ravens by the same score for their championship.

Taylor Ridge earned the Sarah Backstrom Trophy, the award signifying leadership and passion for the game. Ridge competed for the Erie U19 squad.

The 21st Annual Sarah Backstrom Tournament will be held the first weekend of  February 2015.